Animal Crossing: New Horizons is getting an April event and update with Bunny Day, which will run April 1-12. The Easter equivalent will involve searching for Zipper T. Bunny's hidden eggs on your island.

The next Super Smash Bros. Ultimate fighter was teased, and it's a character from Arms. They weren't named specifically, but they'll be joining the roster in June. Alongside this announcement comes a free trial of Arms: Nintendo Switch Online members can play the springy fighting game from now through April 6th at no cost.

Also out today is a Bravely Default 2 demo--the full game is still slated for a 2020 release date. BioShock, Borderlands, and XCOM 2 collections are also headed to Switch. That trio launches on May 29. Catherine: Full Body will arrive on July 7, and Burnout Paradise Remastered will be available this year too.

The Direct ended with more Pokemon Sword & Shield DLC details about the first expansion, Isle of Armor. You can learn about the legendary Pokemon Kubfu in the video above. 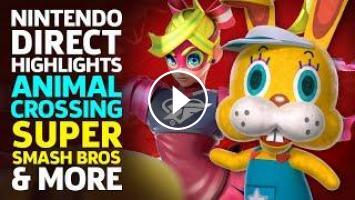