admin
Watch today's Pocketnow Daily as we talk about the OnePlus 6 Avengers Edition that might land whenever Infinity War launches. Then we talk about the LG V40 and its interesting codename. ZTE's new Nubia Red Magic is next as we learn that gaming phones are starting to become a thing. Then we talk about the new new Motorola launches, starting with the new G6 Plus, the regular variant, the Moto E5, etc. We end today's show talking about the major deals you can find today on the MacBook Air on Best Buy.
All this and more after the break.
Stories:
- Best Buy deepens discount for MacBook Air, now from $700
- Moto G6 Plus and ‘regular’ Moto E5 are official, but they’re not coming to North America
- Nubia Red Magic is ZTE’s stab at a gaming smartphone, priced at $400 with Snapdragon 835 SoC
- A “Storm” is brewing for the LG V40 ThinQ as V35 ThinQ nears
- Yes, a OnePlus 6 Avengers: Infinity War Limited Edition is definitely coming, likely as early as next week
Subscribe:
Graphics provided by: Motionvfx.com
About us:
Pocketnow has been a key source of mobile technology news and reviews since its establishment in 2000. With offices on three continents, Pocketnow offers round-the-clock coverage of the mobile technology landscape, from smartphones to tablets to wearables. We aim to be your number-one source for mobile tech news, reviews, comparisons, and commentary. If you love mobile as much as we do, be sure to subscribe!
Follow us: 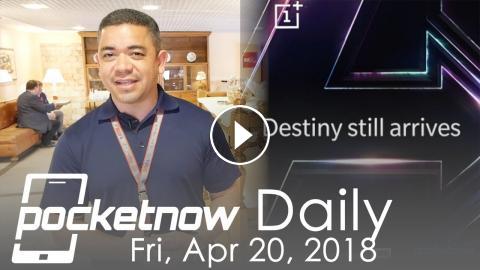