Persona 5 Royal - What To Expect In The First 50 Hours

ava
Michael Higham is in the process of reviewing Persona 5 Royal, and for now he'll be talking about his experience with the first 50 hours of the game and what to expect from the new additions.

Persona 5 Royal is an expanded version of Persona 5, meaning there's a lot to the game. The original release was an achievement as an RPG and an evolution of the long-running franchise. It brought together an expressive art style, incredible soundtrack, bold narrative, and wonderful characters for what turned out to be a 100+ hour journey in rebelling against abusive authority figures. In the same vein as Persona 4 Golden and Persona 3 FES, P5R acts as a definitive version of the base game, but we'll leave that to our review to determine that.

In the video above, reviewer Michael Higham talks about his experience after 50 hours with the game and how the new features and changes affect P5R so far. Given the length of the game (and Michael's ever-growing workload), he's taken the game's advice of 'take your time' to heart. However, he still has time to evaluate the additions that come in those 50 hours. This includes the involvement of the new persona-user Kasumi Yoshizawa, the school counselor Takuto Maruki, and the way Confidant routes have changed slightly. As for combat and exploration, Mementos gets a few overhauls while palaces have been tweaked to accommodate some new elements like the grappling hook and Will Seeds. Additional mechanics like disaster shadows and persona traits shake up the combat for enjoyable twists that make things a bit more dynamic. All that and more is covered in this video.

We currently have an early review impressions feature on Persona 5 Royal to give you an in-depth look at this huge RPG and further examine its new systems. We previously talked to long-time localization manager from developer Atlus about how Persona has evolved over the years and how P5R has some tweaks to controversial dialogue. We'll have guide content as we approach the launch of the game on March 31, and be sure to stay tuned for our full final review in the coming weeks.

Persona 5 Royal - What To Expect In The First 50 Hours 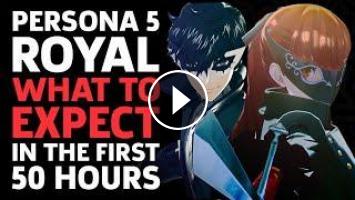 Michael Higham is in the process of reviewing Persona 5 Royal, and for now he'll be talking about his experience with the first 50 hours of the game a...