As an example, no one doubts about the reality of the switchings of the CPUs and of the logic gates in the Programmable Logic Controllers (PLCs) which let worldwide Food and Beverage Bottling Lines run in this moment. No one doubts that what those CPUs and I/Os are performing, are computations over a programmed algorithm. A second attempt to pass around the uncomfortable implications of the reality of the Quantum Field, tried to limit to the atomic and subatomic scales the domain of application of noncommutative geometry rules. But, other examples of noncommutativity were yet known also for objects of the spacetime macroscale of dimensions we directly perceive without any instrumental aid. As an example the geometric rotations of a solid, a massive 3-dimensional book. Then, non commutativity represents rules of general application.

The key point is that Hilbert space represent a system before the measurement action when all of the states of the system exist in superposition. The act to measure a status for a variable (or, Trigger, e.g. the time of passage of a container front of a photoelectric sensor) reduces the observed value to a single point, ...what does not mean that the others do not exist any more or they did not existed at all before the measurement.

Additional confirmations that Quantum Mechanics had since the start the multiversal scenario deeply embedded into its logic. The tree-like branching logic which explains why and how our industrial world exists and operates.

One of the applications of the quantum computers is the Binary Classification. Electronic Inspectors in the Food and Beverage Bottling Lines are Binary Classifiers. (In another page of this site we’ll explain why the ideal Bottling Control is a device calculating in binary way as usual but, in the Hilbert space).

From Decoherence we learnt that the general mechanisms and phenomenons arising from the interaction of a macroscopic quantum system with its Environment, strictly depend on the strength of the coupling between the considered degree of freedom and the rest of the world.

The first commercial application of the Quantum Computing, also devoted to the Binary Classification main task of all Electronic Inspectors, is the D-Wave's “Vesuvius” Central Processing Units are a system of 512 quantum bits (qbits).

- 512 superpositions of the Ψ wave functions, preserved longer than possible in the Hilbert space;
- operating at temperatures of 0.02 K (-272.98 ºC), extremely close to the absolute zero;
- protected by induction of external electromagnetic fields by fifteen levels of Faraday cages.

A mind-boggling amount of other branches of the Multiverse where the computer exists, each one processing the same original qbit with differences from one to another in the variable processed, reduced to 1 bit.

- adopt Rainier processors and Josephson-effect junctions, rather than Silicium-based processors. Josephson junctions are the most basic mesoscopic superconducting quantum device;
- handle qubits which can slowly be tuned (annealed) from their superposition state (say where they are 0 and 1 at the same time) into a classical state where they are either 0 or 1. When this is done in the presence of the programmed memory elements on the processor, the 0 and 1 states that the qubits end up settling into gives the answer to an user-defined problem. 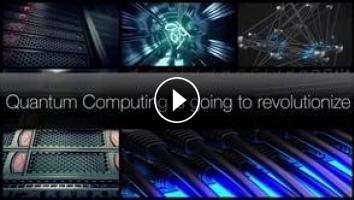 The Hilbert space is yet the base for all practical technological applications. How can it be possible that a useful fiction, a mathematical-only arti...