Fayt
Take part in the action as you play the Road to Six Invitational 2020 event from 1/15-2/16. Play with all Operators unlocked on a brand-new map furnished with bulletproof glass walls that create new tactical situations. Along with this event comes a new Rainbow Six Siege Battle Pass, filled with a variety of rewards for you to unlock. What's more, six Operators have been fitted exclusive themed sportswear for this epic event: Blitz, Caveira, Hibana, Mozzie, Sledge and Thermite

Rainbow Six Siege is an exciting, new approach to the first-person shooter experience that puts tactical combat and masterful destruction at the center of the action. Lead your team of unique, counter-terrorist Rainbow operators through tense and thrilling combat scenarios, and achieve victory through smart preparation and strategic improvisation. Rainbow Six Siege is available now on Xbox One.

-THE RULES OF SIEGE: Five versus Five. Attack versus Defend. Infiltrate versus Fortify. Team-based strategy meets intense, tactical combat.
-WORLD'S ELITE COUNTER-TERRORIST OPERATORS: Choose your Operator and wield their unique ability to breach or defend the objective as a part of an elite team.
-DESTRUCTION AS A TOOL: Walls can be shattered; floors and ceilings can be breached. Mastering the tactical use of destruction is the key to victory.
-CLOSE-QUARTERS COMBAT: With tight spaces shaping all combat arenas, tense encounters and up-close-and-personal firefights abound within every Siege. 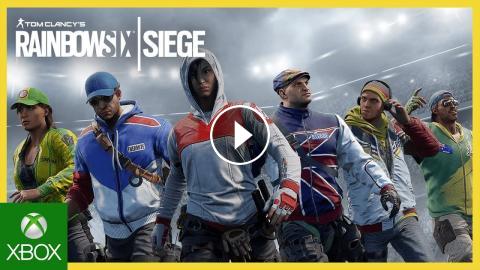 Take part in the action as you play the Road to Six Invitational 2020 event from 1/15-2/16. Play with all Operators unlocked on a brand-new map furnis...