Available now, ‘Butcher’s Banquet’ is free on all platforms, and introduces an entirely new, unexplored region - The Temple - complete with all-new contracts and objectives. As a new threat looms over Kuamar, your mission is to put a stop to the movement’s notorious leader, Mahmoud Zarza, aka… the Butcher.

SGW Contracts 2 is a modern warfare shooter set in the Middle East. Play as Raven, Contract Sniper Assassin, as you take out a series of targets across a dramatic single-player campaign. With extreme-range shots exceeding 1000m, gear up for the most challenging entry to the best-selling first person sniping series yet. 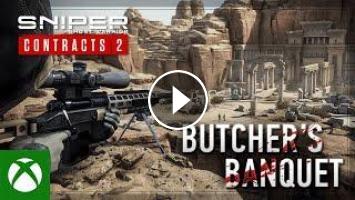