ava
➨ My Recommended Gear:
Win $6,000 Photography Gear Giveaway:
Hands-on Review with the SONY FE 85mm f/1.4 GM Lens and a comparison vs the SIgma 85mm ART with the MC-11 Adapter.
Buy the Sony FE f/1.4 GM From B&H Photo: bhpho.to/2lFEtzG
Sample images and more:
Find and Follow me at:
500px
SUBSCRIBE
GooglePlus:
This is a 4 minute review of the Sony 85mm f/1.4 GM lens and a comparison against the Sigma 85mm f/1.4 ART using the Sigma MC-11 Adapter. Several of you who watched my recent Sigma 85mm ART vs the Canon 85mm f/1.4 L wondered how the Sony would compare. If you haven’t watched that review - it is linked below and all you really need to know is I walked away from the review extremely impressed with the Sigma as I have been of all their new ART series lenses.
The Sony 85mm f/1.4 GM lens is a $1,798.00 f/1.4 to f/16 lens with an 11-blade aperture design The Sigma 85mm f/1.4 ART is a $1,199.00 f/1.4 to f/16 lens with a 9-blade aperture design AND you need the MC-11 Adapter because they do not make it in FE mount which brings the total cost to $1448 though Sigma sells bundles that might bring the price down to $1400
Build Quality -
Both of these lenses are exceptionally well made though the Sony gives you aperture control on the ring with a click/de click switch along with a focus hold button that can be assigned eye-af as well as several other options. The Sony len is dust and moisture resistant and significantly lighter at 1.80 lb (820 g) with a front filter size of 77mm. The Sigma weighs 2.49 lbs not including the extra weight of the adapter and the front filter is a massive 86mm. Another lens you should consider in this focal range is the Zeiss Batis 85mm f/1.8 which weighs just 1 lbs and is noticeably smaller too - I have not personally tested this lens so cannot comment on how it compares but based on the reviews I have seen it too offers a sharp lens and costs less at $1199 no adapter needed. The Sony can be a little noisy to focus at times I don’t hear the same from the Sigma.
Focus
I expected the native sony lens to blow away the Sigma using the adapter and while the Sony certainly is faster and offers all the additional AF modes like tracking and eye af it really isn’t a fast focusing lens and even with the adapter the sigma does quite well though it starts to slow and hesitate noticeably when you move the AF point near the edges.
Image quality
After spending a few days shooting and comparing images I can say that I have an extremely hard time deciding if one lens is sharper - wide open at f/1.4 I find both to be exceptionally and sharp. The 11 bladed aperture might contribute to slightly smoother bokeh but the difference is slight. In some lighting scenarios the sigma produces a slightly warmer image. Overall though from center to edge from wide open to f/16 these are two fine lenses.
In Summary - while I’d like to save you a couple hundred I would recommend the Sony 85 for most users - it’s smaller/lighter, offers weather sealing and a few bells and whistles that make it a more versatile lens. The Sigma though is a fantastic value if you don’t mind bigger/heavier and the clunk of using the MC11 adapter. And finally I briefly mentioned it the Zeis batis 85mm f/1.8 which isn’t as fast but much smaller, lighter though it’s almost the same price as the Sigma.
If you appreciated this brief review give it a thumbs up and hit that subscribe button to be notified of future reviews, tip and tricks AND giveaways like the $6,000 Photo Gear and Experience giveaway happening RIGHT NOW. Link is below this video. Thanks for watching 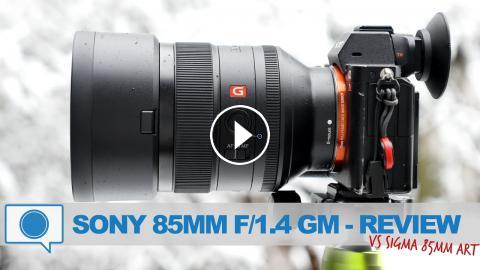