The 2022 Volvo C40 Recharge has been officially revealed overnight, ahead of its Australian launch in late 2022.
Slotting alongside the existing XC40 small SUV in Volvo's compact 40 Series family, the C40 Recharge will be positioned as a sportier, coupe-like alternative to its conventional sibling – and will become the Swedish brand's first model to offer electric power only.
The bulk of the design differences versus the XC40 can be found past the front seats, where the XC-badged model's 'flat' roofline and upright tailgate have been traded for a sloping, coupe-like aesthetic with an integrated black roof spoiler.
The 3D-effect LED tail-lights now continue into the tailgate, with the latter also scoring a second spoiler fixed to its edge.
Up front, the closed-off grille is now frameless, while a more angular lower bumper design and slimmer 'Thor's hammer' headlights with "state-of-the-art pixel-technology" also feature.
Inside, the C40 Recharge shares much of its cabin with Volvo's first electric vehicle, the XC40 P8 Recharge, including its configurable digital instrument cluster and Android-based infotainment touchscreen.
Under the skin, the coupe-styled SUV sits on the same Compact Modular Architecture (CMA) chassis as Volvo's XC40 P8 Recharge and sister brand Polestar's 2 electric vehicles.
Powering the new model at launch will be the same P8-badged powertrain as the aforementioned twins, combining two electric motors and a 78kWh battery for 300kW of power, 660Nm of torque, all-wheel-drive and an expected sub-five second 0-100km/h sprint time.
Drive carefully and Volvo claims the C40 Recharge is capable of covering 420km on a single charge, according to Europe's WLTP test cycle – a figure which will reportedly improve in the future, through over-the-air software updates, as per Tesla vehicles.
DC fast charging up to 150kW is on offer, enabling a zero to 80 per cent recharge in 40 minutes.
A cheaper, front-wheel-drive model is expected to follow at a later date, deleting the motor on the rear axle to send 150kW to the front wheels only. 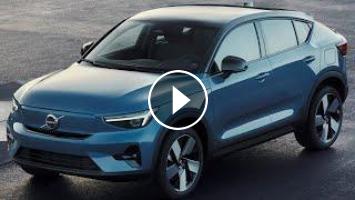