The Witcher 3 Update - What To Expect | GameSpot News

ava
The Witcher 3: Wild Hunt is still getting new updates, and CD Projekt Red has detailed what to expect when the next major update arrives on December 14.

The Witcher 3 is also adding ray-tracing and ambient occlusion on PC, as well as "ultra-plus" settings on PC that introduce more details on background characters and environmental elements.

For PlayStation 5 and Xbox Series X|S, players can look forward to Performance and Quality modes that allow players to choose if they want to prioritize performance (higher frame rate) or quality (better visuals). Additionally, PS5 and Xbox Series X players will get ray-tracing, ambient occlusion, and other graphical features. These won't come to the less powerful Series S, but it does have 30fps and 60fps options to choose from.
On PS5, The Witcher 3 will use the DualSense controller's haptic feedback and adaptive triggers, so players will "feel" the action when they smack and enemy with a sword or perform magic. There will also be a new special mode where players can hold L2 and use face buttons to cast signs instead of needing to access the radial menu each time.

Content inspired by Netflix's Witcher TV show is coming to The Witcher 3 as well, including swords based on what Henry Cavill wielded during Season 1 and Season 2. What's more, cross-progression is coming to The Witcher 3, so players can switch between platforms more easily going forward.
The new update arrives on December 14 alongside the Complete Edition, which includes the base game, all DLC, and the two major expansions: Hearts of Stone and Blood and Wine. At launch, the Complete Edition will be digital-only, but a physical version is coming later.

The Witcher 3 Update - What To Expect | GameSpot News 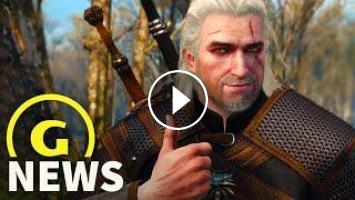 The Witcher 3: Wild Hunt is still getting new updates, and CD Projekt Red has detailed what to expect when the next major update arrives on December 1...