admin
See The 8 Best USB Lighters on Ezvid Wiki ►►
Fact #1. While they can now be found at the counter of virtually any convenience store, gas station, or newsstand, the portable lighter's history only dates back about 200 years. The first lighter was developed by a German chemist in 1823. It used a chemical reaction between zinc and sulfuric acid to create flammable hydrogen gas.
Fact #2. The lighters developed at the beginning of the 20th century used the same basic technologies most lighters rely on today. They typically consist of a reservoir filled with a liquid fuel, with a wick that leads up to a nozzle. Next to the nozzle sits a piece of ferrocerium, and a metal wheel which, when spun, generates friction against the stone and produces sparks. The sparks meet the fuel at the nozzle's opening and create a flame.
Fact #3. USB lighters build on the standard portable lighter by replacing liquid fuel with electricity. This means they can never run out of fuel, as all that is required is a quick recharge in any USB port. It also makes them safer, as they contain no combustible elements, sparks, or liquid fuel-filled chambers.
Fact #4. The vast majority of USB lighters have added safety features like slide-out elements and delayed ignition. That way, if their triggers are accidentally pressed, you don't run the risk of lighting your pocket on fire. If you're going camping and are worried that your lighter's battery may not last, packing an external battery pack can keep the flames alive, so to speak.
Fact #5. A USB lighter's current isn't strong enough to electrocute you, but it is hot enough to burn your skin. In order to effectively ignite paper, the arcs between the electrodes typically reach temperatures of over 2,000 degrees Fahrenheit. That's more than hot enough to do some damage if you come in direct contact. 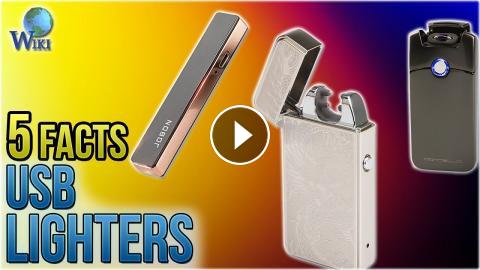 See The 8 Best USB Lighters on Ezvid Wiki ►► Fact #1. While they can now be found at the counter of virtually any convenience store, gas station, or n...