admin
Check out 10 of the most awesome personal subs.

Only the mega-rich can afford luxury yachts, but for the rest of us, other water options exist. Check out 10 of the most amazing personal submarines.

Number 10 - The MIGALOO is billed as "The Ultimate Lux Sub". It offers upscale amenities like a pool, helipad, and a large deck for relaxation. Measuring over 375 feet long by 36 feet wide, the submarine is anything but small. It bears the appearance of a traditional submarine in most aspects but the tower is custom designed in order to house a staircase and elevator shaft.

Number 9 -- The DeepFlight Super Falcon is described as an underwater plane. It is built with 8.8 feet wide wings and it can reach a depth of 1600 feet underwater. It drastically differs from a submarine as it doesn't just sink and rise, but instead uses a downward lift motion. The engine is said to be so quiet, it attracts sea life.

Number 8 -- The Triton 3300/3 is a pretty radical sub. Designed to be eye catching, the submersible can carry a pilot and two passengers along for an underwater ride to depths up to 3300 feet.

Number 7 -- It's the concept behind the submarine hotel called Lovers Deep that really stands out. While most people are familiar with meaning of the Mile High Club, this upscale sub aims to gain popularity for the Mile Low Club, offering lovers the opportunity to have intimate time deep in the ocean right next to stunning sea life.

Number 6 -- The Rinspeed sQuba is one serious multifunctional vehicle. It doubles as a car and sub. The open top convertible can drive straight into the water and plunge up to depths of 30 feet. Given the open top design, it's bizarre that a wetsuit isn't included with the car, however a tank of compressed air is built in to help passengers breathe underwater.

Number 5 -- The Innespace Seabreacher is a force to be reckoned with. The crafts are designed in various forms. Some are made to replicate whales, sharks or dolphins. Described as a diving machine, the submersible watercrafts plunge below the water and jump out and into the air similar to the movements of your favorite sea creatures.

Number 4- The bizarre, cube shaped EGO Compact Semi Submarine definitely lands a spot on the compilation. While it can be used as a traditional boat that floats on top of the water's surface, the EGO Compact can partially submerge to give sea goers awesome underwater views.

Number 3 -- The Platypus Submarine is another double tasking beauty. It can cruise both on top and below the water. Riders sit on the central hull which is flanked by a pair of pontoons that are connected by four horizontal arms. Depending on the position of the arms, the Platypus can travel on the water like a jet ski or dive underwater.

Number 2- The C-Quester 3 submersible by U-Boat Worx is described by the company as a 'robust, spacious and easy to handle submersible'. Capable of seating three people, it comes equipped with an air conditioning system. The craft can stay underwater for a total of eight hours and reach depths over 320 feet.

Number 1 -- Defying typical subs, Island Watersports Hawaii offers visitors and residents the chance to explore the ocean on submarine scooters. The tour company elaborated on the crafts noting 'Our underwater submarine scooters will allow you to view the marvels of the sea while effortlessly riding your very own self-propelled, eco-friendly electric scooter.' 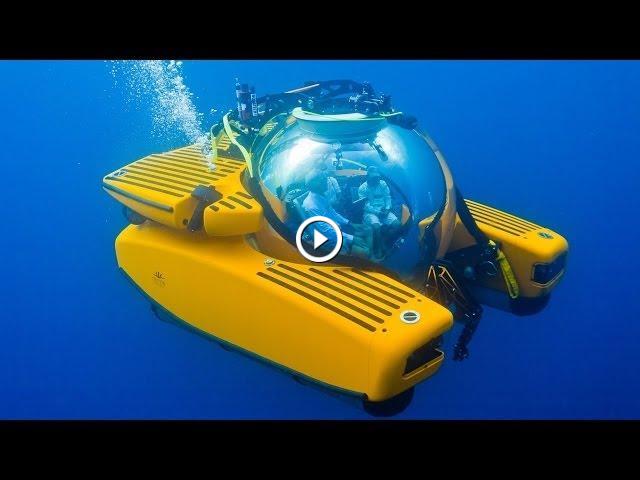 Check out 10 of the most awesome personal subs. Only the mega-rich can afford luxury yachts, but for the rest of us, other water options exist. Check ...