Xbox Series S VERSUS Series X: Which Is Right For You?

ava
Xbox Series S and Xbox Series X: two very similar consoles, with a couple of big differences. Which one is right for you? The Generation Next team compare all the key criteria you need to be thinking about if you want to get a next generation Xbox.

Microsoft's next-generation of Xbox consoles have finally come into focus. Along with the previously announced Xbox Series X, the company will also have a cheaper alternative called the Xbox Series S available. Ordinarily, the difference between two versions of the same console creates distinct experiences, but this time around Microsoft has narrowed the power difference between the two to offer what is essentially the same next-gen gaming experience.

So, what are the differences, what do they mean, and which Xbox is the right one for you? Well, those are exactly the questions we answer on this episode of Generation Next. Lucy, Tamoor, and Jordan talk through everything we know about consoles, highlight the key differences, and explain what impact each of the two consoles will have on the way you play games.

There's also a discussion of price points for both consoles. Microsoft is offering a monthly payment option for both the Series X and Series S. In most cases, this often means that you end up paying more in the long run, however, for the Xbox Series X and Series S, it actually works out cheaper to utilize the All Access purchase option. We explain why and how in the video, so you can make a smart and informed purchasing decision.

Generation Next is GameSpot's weekly video show all about the PlayStation 5 and Xbox Series X. Each Friday, join PlayStation Pro Tamoor Hussain, Xbox Xpert Jordan Ramée, and Console Connoisseur Lucy James as they discuss the biggest stories about the new consoles. Make sure to check out previous episodes of the show on GameSpot and YouTube.

Xbox Series S VERSUS Series X: Which Is Right For You? 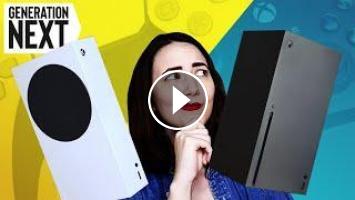 Xbox Series S and Xbox Series X: two very similar consoles, with a couple of big differences. Which one is right for you? The Generation Next team com...