admin
Here are 10 of the creepiest shark species.

While a lot of sharks are dangerous, most of them are actually pretty sleek looking creatures - emphasis on most.

Here are 10 of the creepiest shark species known to mankind.

Number 10. Frill shark. The name may not sound all that daunting, but one look at the beast and its 25 rows of sharp teeth tells a different tale. They live about 2 thousand feet deep in the ocean and thankfully don’t often come around people.

Number 9. Port Jackson shark. The regular gray ones aren’t too freaky looking, but the species does sometimes present with a specific type of albinism that renders them fluorescent yellow. At least it’s easy to see one coming.

Number 8. Basking shark. They’re huge and although a human could easily fit inside of one’s gigantic mouth the shark thankfully is not all that interested in people. Petting one is still ill-advised, though, as their scales are sharp enough to inflict wounds.

Number 7. Saw shark. This one looks menacing, albeit in a cartoon-villain sort of way, but isn’t considered to be a danger to humans. It lives on the ocean floor and spends a lot of time lurking in the sand and mud hunting for crustaceans and fish.

Number 6. Whale shark. Being both a shark and the biggest fish in the sea, this species no doubt instills a lot of fear into casual observers. The pros know, however, this 20-ton ocean dweller is really just a gentle, plankton-eating giant.

Number 5. Spotted wobbegong shark. They look like sea monsters and like to hang out in caves, tide pools and other crevices. Nothing makes them madder than being stepped on, and they react by clamping down hard and not letting go.

Number 4. Big Eye Thresher shark. They like warm waters and have been known to wander into shallow regions, like those popular among swimmers. If you’re ever at the beach and feel like something’s staring at you, it could well be one of these enormous-eyed creatures.

Number 3. Goblin shark. As its name implies, it’s hideous. These fish don’t wander up to the surface much, but once in a while end up in a fisherman’s net. They're often thrown back in as there’s little interest in their display or consumption.

Number 2. Carcharocles megalodon. This truly behemoth sea dweller possessed nearly 200 big, sharp teeth and could grow to be the size of a school bus. Thankfully, it’s been extinct for around 2 million years.

Number 1. Great Hammerhead shark. This one is particularly scary because not only can it quite easily kill a wide variety of animals big and small, it’s particularly adept at finding its desired prey. Wide-set eyes give the shark an enhanced range of vision and its entire head is covered with ultra-sensitive sensors. 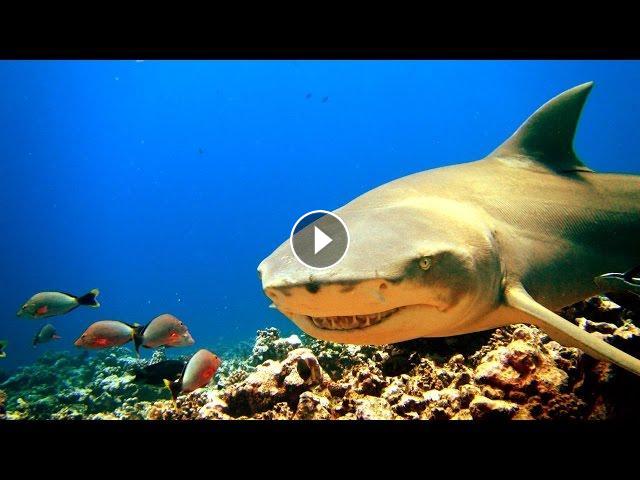 Here are 10 of the creepiest shark species. While a lot of sharks are dangerous, most of them are actually pretty sleek looking creatures - emphasis o...