+ Damascus Steel
Sword was constructed with Damascus steel. The strength, flexibility and wave-like patterns made them completely unique. It is a fact that they could cut a silk veil in the air, and they could slice a rock without damaging the blade's sharpness.

+ The Voynich Manuscript
Wilfrid Voynich, a Lithuanian antiquarian of Polish origin got a manuscript by an anonymous author. The content of this manuscript is still unknown. botany, biology, and astrology.

+ Zhang Hang Seismograph
Zhang-Hang, a Chinese scientist, and an astronomer from the East Han Dynasty presented this seismoscope in the year 132AD. It is a copper vessel with dragon heads aiming at the cardinal points.

+ Ulfberht Sword
Many tombs from the Viking age have been discovered all over the north of Europe. Archaeologists have found inside the tombs a total of 171 Ulfberht swords. These swords were made with techniques that were very advanced for that age. They got their name from the inscription +ULFBERHT+ on their blades.

+ The Iron Pillar of Delhi
This iron pillar, weighing six tonnes and 7.21 meters high, which has not rusted during more than 1600 years, it is still an engineering mystery, located in Delhi, India.

+ The Phaistos Disc
Luigi Pernier, an Italian archaeologist, discovered the Phaistos disc on the Greek island of Crete in 1908. This disc, also known as the Rosetta stone of the Minoan civilization, and made from baked clay.

+ Roman Dodecahedron
One of those mysteries is the Roman dodecahedron. It dates back to 200 years AD. It is a hollow object with 12 sides, made-up of brass or stone. 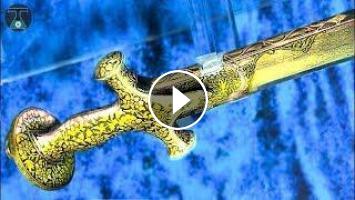