One of these things is not like the others, and that thing is the all-new 2017 Jeep Compass. The newest Jeep isn’t just the smallest entry in this test, it also has the lowest starting price. In those two respects the Compass has more in common with subcompact SUVs like the Honda HR-V and Chevrolet Trax. However, while those vehicles top out in the mid-to-high $20,000 range, our 2017 Jeep Compass Limited tipped the scales at more than $35,000, making it the second priciest of the six SUVs we tested. Jeep vehicles have a history of straddling segments, and the Compass is no exception.
But a $35,000 Jeep Compass is a tough sell from a purely practical perspective. For example, the 2017 Honda CR-V Touring in our test was roomier, more powerful, more efficient and more feature-laden than our Compass Limited, while also boasting a more proven track record and higher predicted resale values that promise to return thousands more dollars to owners’ pockets when it comes time to sell. The Honda’s sticker price was also about about $1,000 less than the Jeep’s.

The Jeep Wrangler is similarly disadvantaged, however, and it’s a legend. And even if the Compass is no Wrangler from an off-road perspective, it’s still a Jeep. The Jeep brand is among the strongest and most storied marques on the road, and badges carry a lot of weight with car buyers. While we didn’t incorporate an off-road component in this test, the Compass has proven worthy of Jeep’s 7-slot grille in separate evaluations before and after our comparison test.
If you’re all about getting the most for your money, you’re probably going to pass on the Compass. But if you appreciate a sense of adventure and the ability to deliver, a Jeep can be hard to resist.

Highway Driving
Not surprisingly, the 2017 Jeep Compass is at its relative best while driving over dirt, rocks, mud and/or snow. And while it’s surprisingly smooth and comfortable in steady-state highway cruising, the Compass is hampered by a shortage of power and a 9-speed transmission that’s slow to respond to a driver’s demands for more. Technology is playing an increasingly large role in highway driving, and the Jeep’s unrefined lane keep assist system and lack of available adaptive cruise control also were shortcomings in this comparison.

City Driving
We found the Compass to be rather pleasant around town, where modest power is usually plenty. The powertrain worked well to move the Compass smoothly away from a stop, and got it up to speed without the strain or effort we experienced during more urgent, higher-speed acceleration. The brakes in our Compass were very touchy for the first couple stops of every day -- an unusual quirk -- but once they warmed up braking performance was strong and linear. The wide rear pillar took a toll on rearward visibility, but not to an unmanageable degree.

Interior Appeal
With a strong mix of tasteful design, high-quality materials and a big, pretty touchscreen front and center, the visual appeal of our Compass Limited’s interior was among its strengths. Noted shortcomings included a dearth of personal storage space up front, a narrow armrest that gets crowded with a co-pilot, and awkwardly placed climate controls (attached to an A/C system that struggled to counter triple-digit temps during our run across the Southern California desert). Most agreed the front seats were a bit small and a bit firm, but otherwise supportive and comfortable.

Infotainment
Chrysler and company’s Uconnect infotainment system has long been a staff favorite for its easy and intuitive operation, and the latest version is the best yet. With updated graphics and the addition of Apple CarPlay and Android Auto compatibility, the range-topping 8.4-inch version in our test car was rated the best infotainment system in the bunch.

Resale Value
Predicted resale value is a weak spot for the 2017 Jeep Compass, with our ~$35,000 Compass expected to return about $3,000 less than our ~$35,000 Honda CR-V when it comes time to sell or trade in a few years. Even if you spread that difference over a five-year ownership period, the Compass could cost an extra $50 per month in depreciation alone.
Read More https://www.kbb.com/car-news/all-the-latest/compact-crossover-suv-comparison-2017-jeep-compass/2100004341/ 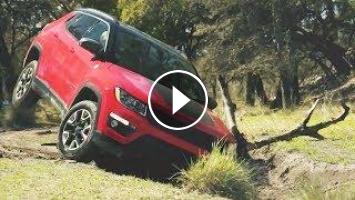