ava
The new Audi A7 Sportback:
Sporty face of Audi in the luxury class

The A7 Sportback represents the new Audi design language to a great extent and delivers on the design promise made by the prologue studies. The four-door coupe sets standards in the luxury class when it comes to progressiveness. It embodies a new style of Gran Turismo, with dynamic lines, systematic digitalization, a sporty driving experience and a versatile space concept.

Dynamics at their most beautiful: the exterior design
The exterior design of the A7 Sportback is an expression of the new design language that Audi introduced with the prologue study and made its production debut in the new Audi A8. With large surfaces, sharp edges and taut, athletic lines, the A7 signals dynamics and progressiveness from every perspective.
Up front, the Singleframe grille – wider and lower than that of the Audi A8 – the narrow headlights, the boldly contoured air inlets and the flat front end convey at a glance the sportiness of the Gran Turismo. The headlights are available in three versions. With the middle and top equipment lines, the light signature takes up the subject of digitalization: 12 adjacent lighting segments separated by narrow intervening spaces evoke associations with the binary digits 0 and 1. The top version is the HD Matrix LED headlights with Audi laser light.

Show car design comes to production: the interior
The interior fuses design and technology in a unique way. The interior of the new Audi A7 Sportback dazzles with its futuristic lounge atmosphere. Its reduced, clean design language is based in a one-of-a-kind balance of tension and coolness. The horizontal lines and sleek instrument panel provide for a feeling of airy spaciousness. The center console is oriented toward the driver, underscoring the Gran Turismo’s sporty character. Four key values characterize the interior concept: progressiveness, sportiness, intuitiveness and sophistication. All colors, upholstery materials and inlays underscore the new aesthetic, from the base version to the design selection, the S line sport package and the particularly sophisticated Valcona leather. The optional contour ambient lighting package traces the contours and subtly highlights the space.
The 10.1-inch upper display (in combination with MMI navigation plus) is tilted toward the driver. With its black panel optics and framed in a graphite gray aluminum clasp, it almost disappears into the dashboard when switched off. The body supporting the clasp is itself a geometric sculpture. The display’s user interface appears as soon as the car is opened. In keeping with the interior design, the look is reduced and succinct. All screen content can be quickly registered.

Broad-based electrification: mild hybrid system for greater comfort and efficiency
The new Audi A7 Sportback will initially launch with the 3.0 V6 TFSI. The sonorously understated V6 turbo produces 250 kW (340 hp) and 500 Nm (368.8 lb-ft). The four-door coupe sprints from 0 to 100 km/h in 5.3 seconds and has a top speed of 250 km/h (155.3 mph). In the NEDC, the base version of the Audi A7 55 TFSI consumes 6.8 liters of fuel (34.6 US mpg), corresponding to CO2 emissions of 154 grams (247.8 g/mi). The 3.0 TFSI is paired with a seven-speed S tronic. Its quattro drivetrain uses the efficient ultra technology that activates rear-wheel drive as needed. Additional six- and four-cylinder engines, both gasoline and diesel, will follow shortly after the start of production.

The new Audi A7 Sportback rolls off the assembly line at the Neckarsulm site and will launch on the German market in late February 2018. The base price for the 55 TFSI quattro S tronic is 67,800 euros.
Read More https://www.audi-mediacenter.com/en/press-releases/the-new-audi-a7-sportback-sporty-face-of-audi-in-the-luxury-class-9512 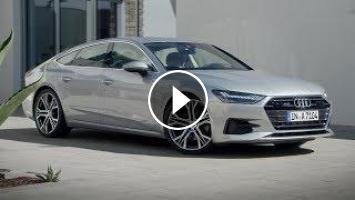 The new Audi A7 Sportback: Sporty face of Audi in the luxury class Four-door coupe embodies progressiveness in design and technology All-digital contr...