ava
2018 AUDI A8 The Perfect Sedan! Most High Tech Car Ever!
Serenity on four wheels.

If the unregulated realm of the automated car is the Wild West, Audi could be the next Billy the Kid. Its all-new A8 luxury sedan is positioned to be the first vehicle to offer Level 3 self-driving capability. Like the actual Wild West, the highly autonomous version is filled with the unknown and uncontrollable, but here the threats are regulation and liability, not gunslingers. Accordingly, Audi still won’t say whether the first car with self-driving capability will actually be allowed to drive itself when it goes on sale in the United States in the fall of 2018.

Either way, the 2019 A8 poses a genuine threat to Mercedes-Benz, BMW, and Cadillac. It is taller, longer, more isolated from the road, yet better controlled than the A8 it replaces. It is a cruise missile for the wealthy; it flattens mountains and straightens freeways with ease. And even absent Traffic Jam Pilot, the official term for the headline self-driving feature, it’s quite likely the most technologically advanced car in the world.

At launch, the A8 will be available with one engine, a single-turbo 3.0-liter V-6 good for 340 horsepower and 369 lb-ft of torque. Shortly thereafter, by the end of 2018, a twin-turbo 4.0-liter V-8 with 460 horses will follow. Both powerplants get limited hybrid assistance, thanks to the use of an alternator that doubles as a starter (BAS, for belt-alternator-starter, in Audi lingo), an arrangement that powers a 48-volt electrical system. The alternator/starter is good for 16 horsepower during energy recuperation and 9 horsepower when assisting the gasoline engine. Its purpose, according to Alexander Kruse, the Audi engineer responsible for the development of the BAS system, is to assist the gas engines in achieving their most efficient operating rpm sooner, thus improving fuel economy. The BAS will add torque to the powertrain mix, but its contributions are at the low end—nowhere near the peak output of the engines.

Audi’s German planners tell us the W-12 engine will not come to the United States, despite its being offered in previous A8s, but U.S. representatives for the company aren’t yet willing to admit it. We’re not holding our breath. Both the V-6 and V-8 engines are paired with ZF’s paddle-shiftable eight-speed automatic transmission, and Quattro all-wheel drive is standard. EPA estimates aren’t yet available, but it’s safe to say that Audi didn’t make the A8 a hybrid so it could be less efficient than the car it replaces, which yielded a combined 22 mpg when fitted with the supercharged 3.0-liter V-6. For those with mileage at the top of their desires, a plug-in hybrid model offering 449 combined horsepower and equipped with inductive-charging capability will arrive in early 2019.

Like the current A8, the fourth-generation sedan will be available in the United States only in the longer of the car’s two wheelbases, which this time spans 123.1 inches. It’s not yet determined whether the S8 to be spun from this new model will come in the shorter, 118.0-inch wheelbase, following the strategy used on the current A8/S8. Length is up by 1.3 inches and height by 0.7 inch, while width shrinks by 0.1 inch. As executive sedans go, the A8 is sized to compete with the other German megacruisers. Its wheelbase is 1.5 inches shorter than the Mercedes-Benz S-class and 3.3 inches shorter than BMW’s 7-series. It’s a segment built around the rear seat, and all three cars offer ample space to let riders’ Testonis breathe.

We drove the A8 in southern Spain over mountainous terrain lined with glass-smooth, ribbonesque two-lanes that lacked both shoulders and mercy. Our time behind the wheel came in relatively benign A8s equipped with the V-6 and lacking some of the machine’s most compelling features. We weren’t able to try Traffic Jam Pilot during this specific experience, but we had already driven a car equipped with it and found the system, while capable of relieving traffic-induced stress, was quite limited in scope.
Read More https://www.caranddriver.com/audi/a8 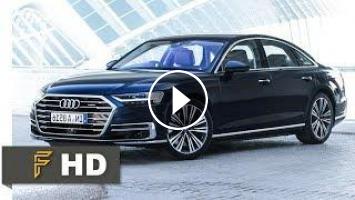 2018 AUDI A8 The Perfect Sedan! Most High Tech Car Ever! Serenity on four wheels. If the unregulated realm of the automated car is the Wild West, Audi...