Almost fifteen years after its initial launch, the X3 continues to hold strong today as one of the best handling vehicles in its segment. Now, the X3 enters its third generation with a new exterior design, an M Performance model, aerodynamic and chassis upgrades, and new technologies including gesture controls.

Unsurprisingly, the 2018 BMW X3 retains its same basic look from the previous generation. But the headlights are no longer connected to the kidney grille, which now features a more three-dimensional look. The foglights adopt a new hexagonal shape, and in the rear, a downward sloping roof spoiler adds visual interest. The wheelbase has been extended by 2.2 inches, and the overall length of the X3 has also increased by more than 2 inches.

BMW has announced two trim levels for the new X3: xDrive30i and M40i. The first model comes paired with a 2.0-liter twin-turbo inline-four producing 248 hp and 258 lb-ft of torque, up 8 hp from the outgoing xDrive28i. With this engine, the X3 can hit 60 mph in 6 seconds and a top speed of 130 mph, according to BMW estimates. The M40i ushers in the first M Performance variant for the X3, and it packs a 3.0-liter twin-turbo inline-six with 355 hp and 369 lb-ft of torque. That’s up 55 hp and 69 lb-ft from the most powerful X3 from the 2017 model year. Thanks to the added power, BMW expects the model to sprint to 60 mph in 4.6 seconds. Meanwhile, BMW has not announced a diesel engine for the new X3.

The X3 comes standard with all-wheel drive, and the rear bias of this system has been increased for better handling. All models also feature an eight-speed automatic transmission, which is specially tuned for sharper performance in the M40i model.

Improved aerodynamics come in the form of enhanced body proportions, additional underbody cladding, an active kidney grille, roof spoiler with Aero Blades at the sides, and BMW Air Curtains. The latter feature intelligently regulates the flow of cooling air for the brakes, air conditioning system, and engine. BMW says it has improved the X3’s steering feel and straight-line stability with updates to the chassis. M40i models benefit from M Sport brakes, an M Sport exhaust, and either a traditional M Sport suspension or available Adaptive M Sport suspension.

The X3 boasts new standard features such as three-zone automatic climate control that adds separate temperature controls to the back seat area. Meanwhile, reclining for the 40:20:40 seat backs can now be adjusted individually. Optional features include front ventilated seats, new ambient lighting, a now 75 percent larger head-up display, and Luxury and M Sport packages that bring a host of cosmetic upgrades to the interior and exterior. A factory-installed trailer hitch is available for the first time. The model also introduces gesture controls allowing customers to change the volume or perform other tasks directed toward the 10.25-inch touchscreen. Gesture controls first debuted on the 7 Series and later trickled down to the 5 Series.

The 2018 BMW X3 will join the X4, X5, and X6 at BMW’s production facility in Spartanburg, South Carolina. Expect the X3 to roll into dealerships this November. Pricing information will be announced closer to that time.
Read More http://www.motortrend.com/cars/bmw/x3/2018/2018-bmw-x3-first-look/ 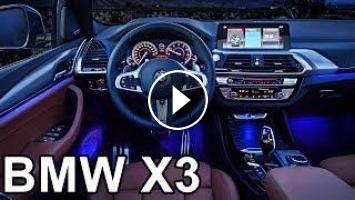 2018 BMW X3 First Look (Review) An X with a little more M Almost fifteen years after its initial launch, the X3 continues to hold strong today as one ...