Last year, Mercedes wowed us all with an electric coupe concept it called the Vision Mercedes-Maybach 6. While the name was a bit of a clunker, everything else about it was pure elegance. It was nearly 19 feet long, almost all hood, and rode in silence thanks to its electric powertrain. The Vision 6 is back at Pebble Beach this year, this time without its roof.

In cabriolet form, the Vision 6 is still impossibly long, wide, and low. Only now, the peasants can get a better look at who’s driving. Instead of last year’s red, it’s been painted blue and rides on new 24-inch alloy wheels. Rims that size would look massive on most other cars, but the Vision 6 Cabriolet is so impossibly long, it actually makes 2 feet of wheel look appropriate. Of course, since this is a Maybach concept we’re talking about, the center lock is painted in rose gold. That’s not the only gold decorating the exterior, either. The fabric top also has rose gold threads woven in to match.
Inside, the driver is treated to what Mercedes calls a “360° open-air luxury lounge.” As you can see, the cabin is designed to flow around the occupants, wrapping them in luxury. There aren’t even really separate seats. Instead, the driver’s door panel almost seamlessly transitions into the seat bottom, then into the armrest, the passenger seat, and finally the passenger door panel. And there’s no infotainment screen integrated into the dash, either. Instead, the display is part of a strip that encircles the cabin. The dials and air conditioning vents contrast with the rest of the futuristic interior, using analog needles and classic design cues.

There’s also a sea of white Nappa leather covering almost every surface you might touch. The buttons used to secure the leather to the seats, for example, each have a Mercedes star on them backlit in blue. Oh, and of course the trim pieces are made from rose gold. The floor is covered in open-pore wood and inlaid aluminum to continue the boat theme that the car’s massive length and shape started. The transparent center tunnel, meanwhile, uses blue fiber optics to remind occupants that they’re in an electric land yacht from the future.
Speaking of the Vision 6 Cabriolet’s electric powertrain, it’s even more powerful than the coupe. Instead of 738 hp, it now makes a full 750 hp. Despite the car’s incredible size, Mercedes says that’s enough to hit 60 mph in less than 4 seconds. It also has a claimed range of more than 200 miles and supposedly gains 60 miles of range on only a five-minute charge.

With the luxurious interior of the Vision Mercedes-Maybach 6 Cabriolet, Mercedes-Benz demonstrates a new synthesis of intelligence and emotion. At the same time, the designers have combined the unique tradition of the brand with a previously unknown high-tech experience.
The generous, flowing design idiom brings exterior and interior together in a holistic design. The formal flow of the areas from the rear into the interior gives rise to a typical yacht feeling. A light wing flows in a curve across the door trim and the center tunnel into the seat landscape, creating a 360° open-air luxury lounge.
The new "inside out" spatial design adds a particularly special feature. The sitting surface forms a horizontal plane, transitions into the vertical plane of the doors and finally becomes the underside of the dashboard wing.

In addition to the flowing contours, the material composition produces a luxury experience of the highest order. Here, too, the interplay of the contrasts is both hot and cool. The brand's hallmark authentic materials and colors are used, such as rose gold on the trim elements, or the surfaces which come into contact with the skin, featuring a lavish, quilted crystal white nappa leather finish. In this luxury technique, familiar among other things from Chesterfield furniture, the leather is put into folds in a diamond pattern and secured to the frame with buttons. In the case of the Vision Mercedes-Maybach 6 Cabriolet, this traditional seat upholstery boasts a futuristic interpretation: each individual button of the quilting depicts a delicate Mercedes star, backlit in blue. The open-pore wood floor with inlaid aluminum underscores the lounge sensation and the connection to yachting.
Read More http://www.motortrend.com/cars/mercedes-benz/e-class/2018/vision-mercedes-maybach-6-cabriolet-first-look/ 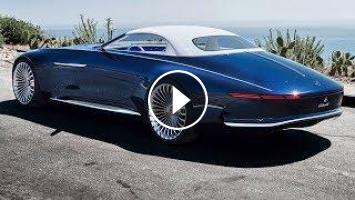