Today marks the next step in BMW's "Next" concept program, previewing the company's future. It's the most exciting step, too, because this particular concept is called the BMW Vision M Next. As this "Next" ground is still relatively untrodden, we'll make it clear that M means the same thing here as it does for every BMW M car. This particular firecracker is meant to give us a taste of what's coming to BMW's M division, electrification and all.

The shape and stature of the car instantly screams i8 at us. However, the actual design and styling is new and unique to itself. More than anything, it looks like a worthy evolution of the i8, previewed in concept form. When we get to the powertrain details, it sounds even more like such a vehicle. BMW didn't make it a fully electric car. Instead, it's a plug-in hybrid with a turbocharged four-cylinder drinking gasoline. We aren't privy to the engine's specs, but BMW says the combined system output is 600 horsepower. That's good for 0-62 mph in 3.0 seconds and a top speed of 186 mph. Recalling the i8, that car has a turbocharged three-cylinder combined with an electric motor that makes 369 horsepower in total. The M Next is capable of driving 62 miles electric-only on a full charge, while the i8 is only capable of 18 miles. Needless to say, the M Next is a huge step forward in every way.

BMW likes to use a lot of colorful language to explain and detail its styling decisions, but we can stick to the important stuff. Those kidney grilles are rather eye-catching. Even though it may not look it at first glance, they're blanked off with a transparent layer of bodywork. The pattern visible in the grille was actually laser-etched in there, and is also illuminated. Fancy stuff. Another interesting bit is the headlight technology. BMW calls it "Laser Wire" lighting. Glass fibers coated with phosphorous are used to produce the elements, which results in an extremely thin form that we see with one stacked on top of each other. BMW used the same tech to create the taillights, and you'll notice floating BMW roundels floating inside the element, too. The rear "window" design is meant to remind of the BMW M1, which happens to be a glorious car design to take inspiration from. In the M Next's case, the three-piece louvres are made of glass. We'd be remiss if we didn't mention all the glorious orange used throughout the car. BMW calls it "Thrilling Orange," and it's thrilling indeed.

Also worthy of discussion is the rather spartan and technology-infused interior. We're not so sure about the design from the photos BMW provided us with, but make your own judgments. There are three displays, all directly in front of the driver. Massive infotainment screens need not apply in the M Next. The first display comprises two tiny screens on the steering wheel, followed by a curved glass display where one would expect an instrument cluster. Finally, an AR (augmented reality) head-up display stretches across part of the windshield to offer even more information at a glance. The point here is to make all the displays fall in the driver's line of sight. Whether that distracts the driver with display overload, or takes pressure away from looking to the center infotainment display is still up to the jury to decide. BMW does point out that it's opposite the goal of the Vision iNext, which attempts to make the technology accessible to everybody in the car.

One neat interior feature we'd love to see on today's cars is a gyroscopic cup holder. BMW says it's able to compensate for strong lateral and longitudinal forces, which would be great when you're trying to accelerate through an on-ramp with the morning coffee in tow. There's no indication of when we might see any of the technologies previewed in the M Next, but it could serve as a point of reference for an i8 successor or even a standalone M car.
Read More https://www.autoblog.com/2019/06/25/bmw-vision-m-next-concept-debuts-m-division-fkr33b/ 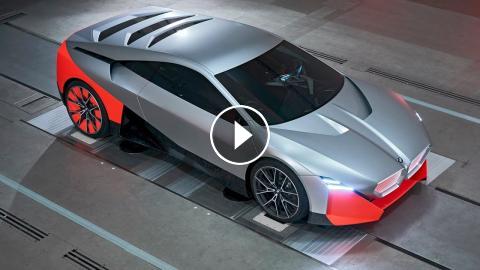