And as a mobility concept, the Audi Aicon shows the world of tomorrow, in which the advantages of door-to-door individual transportation are combined with the luxurious ambiance of a first-class airline cabin. A cabin with no steering wheel or pedals that can thus offer all the comforts of modern communications electronics and perfect ergonomics – simply first-class.
One look is all it takes: In contrast to a robot taxi, which is reduced to pure functionality, the autonomous Audi Aicon concept vehicle pulls out all the stops. Its presence is impossible to ignore, and its exterior hints at the spacious comfort afforded the passengers and the upscale technical aspirations. The Audi Aicon is a sneak peak at a prestigious automobile of tomorrow that stirs the desires of demanding customers.

Emotion and information – the LED lighting technology
Conventional headlights and lighting units are absent from both the front and rear of this car. Instead there are fully digital display surfaces comprising hundreds of triangular pixel segments. They are three-dimensional recreations of the Audi AI symbol.
Grouped around the Singleframe are large light fields, in which – as at the rear – more than 600 3D pixels are arranged in space. The large surfaces and high pixel count enable versatile graphics, animations and information visualizations in any color. The Audi Aicon is thus no longer bound to a daytime running lights look, but rather can adapt to the driving situation and even its passengers. The customization is boundless.
Horizontally cut lighting segments to the left and right of the Singleframe look like eyes and can be expanded to resemble wide pupils or squinted for an aggressive look. If the car detects passers-by or other road users, it literally makes eye contact with them and follows them with its “eyes.”
The Audi Aicon supports its surroundings intelligently and uses animations on its display surfaces to warn pedestrians or cyclists of dangerous situations. Driving modes such as platooning, urban driving or driving at a walking pace can be visualized. Horizontal stripes of light move from the bottom up when the car accelerates and in the opposite direction during braking. Their speed increases or decreases in sync with that of the car.
Read More https://www.audi-mediacenter.com/en/press-releases/audi-aicon-concept-car-autonomous-on-course-for-the-future-9332 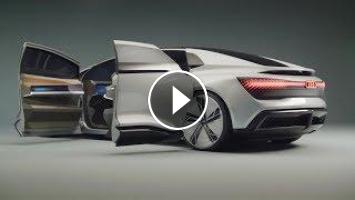 Audi Aicon concept car – autonomous on course for the future Audi vision for Level 5 operation Revolutionary styling All-electric with up to 800 kilom...