Audi A3 sedan scores bold looks, mild-hybrid tech
The new sedan isn't much larger than before. Stretching out to 177.6 inches, the new A3 is only about 1.6 inches longer than the current four-door and 5.9 inches longer than the updated Sportback that debuted last month. The 103.8-inch wheelbase is unchanged, however. Elbow and shoulder room increase by less than an inch and trunk capacity remains unchanged at 15 cubic feet, with the rest of the dimensions sticking closely to the established script.
Within its compact footprint, the new A3 boasts a much more aggressive design. A deep undercut into the sedan's flank emphasizes the continuous shoulder crease that runs from the headlamps all the way back to the tails, but also throws the meaty "quattro blister" fender bulges around the wheel arches and the sporty lower sills into sharp relief. Despite only being 0.8 inch wider than before, the new A3 Sedan looks like it's rocking a wide-body kit. Just imagining how much meaner an RS3 variant might look is sending chills up my spine.
Tear your eyes away from the haunches for long enough and you may notice that the roofline's rear has a gentler, more "coupelike" slope. The effect is subtle -- not quite as coupe-y as, say, the Mercedes-Benz CLA-Class, but noticeably less upright than before.

Up front, you'll find an enlarged "Singleframe" grille with a honeycomb pattern, as well as larger and sharper LED headlamps. Like many new Audi models, including the upcoming E-Tron Sportback, the next A3 will be available with the automaker's light-shaping Matrix LED hardware, which US drivers will be able to take advantage of if and when it becomes legal on our highways. Rounding out the new design is a slightly higher rear end with a new LED taillight design and an enlarged rear diffuser that improves aerodynamic efficiency at speed.
Updated tech

The interior gets an overhaul with an all-new dashboard design and the latest generation of Audi tech. The new cockpit is much more angular and driver-focused in orientation, tilting its infotainment stack slightly toward the pilot's seat. Ahead of the steering wheel is a new standard 10.25-inch digital instrument cluster or, with the Virtual Cockpit Plus upgrade, a 12.3-inch customizable display. To the left is the main infotainment display, a 10.1-inch touchscreen that looks much better than the pop-up "toaster" display in the last A3 that I drove.
Based on Audi's third-gen Modular Infotainment Platform, aka MIB3, the new A3's MMI Touch infotainment suite packs a claimed 10 times more processing power than its predecessor, which is put to use powering handwriting detection, natural language voice command, 4G LTE connected destination search and a host of new features. Apple CarPlay and Android Auto connectivity return as standard features. On the wide center console, I spy what appear to be a pair of USB Type-C ports for smartphone charging and connectivity, a small physical control knob and a new electronic shifter.

Mild-hybrid assist
Audi has only released information regarding European powertrain options so far. Over yonder, buyers will be able to choose from four different configurations -- ranging from a 30 TFSI three-cylinder to a pair of 2.0-liter diesels -- with the most interesting being the gasoline 35 TFSI. This 1.5-liter turbocharged gasoline four-banger makes 148 horsepower when mated with the (regrettably) not-for-North-America six-speed manual, but opting for the seven-speed dual-clutch transmission also adds a 48-volt mild-hybrid system and an additional 37 pound-feet of on-demand torque to the party. The electric assist aids during acceleration and enhances the stop-start system, allowing the engine to more liberally shut down when coasting or idling.

But, while that 35 TFSI is certainly interesting, I expect that North Americans will likely get some version of the 2.0-liter turbo-four that the current A3 40 and 45 TFSI use, matching at least the current 184-to-228 hp range. My sources suggest that the 48-volt mild-hybrid will come to the US and Canada, but its exact capabilities remain to be determined.

In the meantime, German preorders for the 2021 Audi A3 open at the end of this month, with deliveries beginning in the summer. Launch pricing starts at $32,400 (converted from the euro price) for the 35 TFSI, dropping to $30,120 when the 30 TFSI joins the lineup post-launch. Today's 2020 Audi A3 starts at $33,300 (plus $995 delivery), and it's unlikely the fourth-generation model will stray too far from that neighborhood. 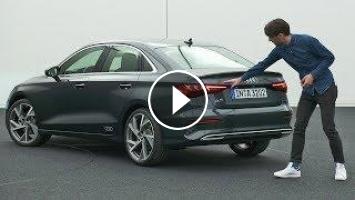