Mercedes-Benz lightly updates the exterior styling of the regular E-class and the AMG-tuned E53 sedans.
The E450 receives a six-cylinder engine to replace its previous V-6, and the plug-in-hybrid E350e finally makes its U.S. debut.
Other upgrades include new steering wheel designs, an enhanced infotainment system, and the latest driver-assistance technology.

Even with the focus on crossovers and SUVs, the E-class remains the heart and soul of Mercedes-Benz. It's the company's best-selling model series of all time, and the sedan variants receive a makeover for 2021 that includes redesigned exterior styling, new powertrains, and additional technology features. Of course, we eventually expect to see these changes applied to the E-class coupe and convertible as well as the fire-breathing AMG E63 S.
There are two distinct versions of the four-door E-class. The four-cylinder Mercedes-Benz E350 and six-cylinder E450 models along with the AMG E53 both receive a new look that includes lightly redesigned front and rear ends. The non-AMG E-class adds slender bulges to its hood and updated headlights as well as a sleeker-looking rear bumper, trunklid, and taillights. The E53 gets similar revisions to go along with a new rear diffuser and a grille that now features vertical bars instead of horizontal ones.

Better Tech
Every 2021 E-class gets Mercedes-Benz's latest MBUX infotainment system. That means the old COMAND system with its rotary controller/touchpad mounted on the center console is replaced with one large touchpad. MBUX can also be controlled through the 12.3-inch touchscreen, buttons on the steering wheel, and voice commands. The latter can be activated by simply saying, "Hey, Mercedes." We've found that the system will sometimes irritatingly interrupt our conversations where the word "Mercedes" is merely mentioned. Since we haven't tested the newest software, which now also includes augmented video navigation, we can only hope those voice-recognition bugs are fixed.

The regular E-class and E53 benefit from upgraded driver-assistance technology, too. The latest-generation Mercedes steering wheels use capacitive hands-off detection. The vehicle now knows when your hands are on the wheel while using lane-keep assist and adaptive cruise control without the driver having to wiggle it like torque-detecting systems. That should reduce the amount of false alarms from the driver assistance feature. The E-Class’ adaptive cruise control, automated emergency braking, blind-spot monitor, and self-parking assist functions have also been updated to the latest generation according to the automaker.

The E350 continues to use a turbo 2.0-liter inline-four that makes 255 horsepower and 273 lb-ft of torque. It still mates to a nine-speed automatic and either rear- or all-wheel drive. However, Mercedes will finally bring the plug-in-hybrid E350e to the U.S. market. While it's only available with rear-wheel drive, its four-cylinder engine works with an electric motor to generate a total output of 315 horsepower and 516 lb-ft.
To replace its previous V-6, the E450 inherits a turbocharged 3.0-liter inline-six (codenamed M256) with a 48-volt hybrid system that doubles as an electric supercharger. The setup sends 362 horsepower and 369 lb-ft through a nine-speed automatic and all-wheel drive.
The E53 is still powered by an AMG-tuned version of this turbocharged 3.0-liter inline-six that makes 429 horsepower and 384 lb-ft of torque. It pairs exclusively with a nine-speed automatic transmission and 4Matic all-wheel drive. The AMG E comes standard with an air suspension and rides on standard 19-inch wheels or optional 20-inch rollers.

Here the key facts about the refresh: 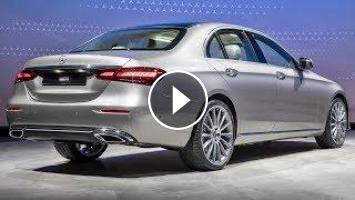