The most obvious difference between the V60 and big-brother V90 is in length. The V60 is almost 7 inches shorter than the V90, though the wheelbase length has only been reduced by 3.9 inches. Elsewhere, the V60 is only an inch or two smaller in both width and height.

Good luck spotting any big differences inside the cabin. The V60’s interior is visually identical to that of the XC60 crossover and 90-series cars, with a vertically oriented touchscreen in the center console, only a few buttons and knobs below it, a digital gauge cluster and the same lovely wood and aluminum inlays on the dash and doors. The Sensus infotainment system carries over unchanged, is fully compatible with Apple CarPlay and Android Auto and has a built-in 4G wifi hotspot.

Six powertrains will be offered worldwide: two T5 and T6 petrol engines, two D3 and D4 diesels (not for the US, of course — especially with their six-speed manual transmissions), and two gasoline-electric plug-in hybrids. That’s right, Volvo is expanding its plug-in offerings, and the V60 is the first model to use the smaller T6 Twin Engine setup, in addition to the larger T8.

The 2.0-liter turbo inline-four engine in the T6 produces 310 horsepower and 295 pound-feet of torque, and only comes with an eight-speed automatic and all-wheel drive. Volvo says this combination allows the V60 to sprint to 62 miles per hour in a respectable 5.8 seconds. Base T5 engine specs aren’t available just yet.

The V60 will come with two PHEV powertrains. Plug it in, plug it in. 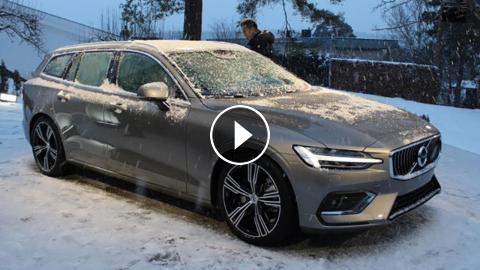 2019 Volvo V60 Cross Country Experience https://goo.gl/mjUhDiThe most obvious difference between the V60 and big-brother V90 is in length. The V60 is ...