The all-new, all-electric 2020 Audi E-Tron SUV received nary a second glance whizzing from San Francisco to Lake Tahoe. The whisper-quiet, high-riding, hustling $74,800 E-Tron is a Trojan Horse dressed in a familiar shape and size that splits the difference between the brand's Q5 and Q8, and featuring familiar Audi visual cues. The E-Tron looks and moves just like any other constituent entry in Audi metastatic crossover proliferation. It could easily wear the name Q6, or Q6.75.

When releasing their first EVs, each "heritage" carmaker approaches the task in a manner that is meant to align with their core equities. Audi has thus elected to privilege a kind of precise, technical gravitas. The car and all of its systems feature the brand's endemic purity: clean interior and exterior design, quality but subdued materials, LCD-forward haptic driver interfaces (three screens!) generally unmarred by fussy buttons.

Even the thinking about range and charging, known in Audi-speak as "electric ecosystem," reflect this unpretentious sincerity. Audi plans to diminish consumer perceptions of range anxiety by smoothly paving a pathway toward 240-volt in-home charging where 80% of power-ups take place. It will accomplish this, rationally, utilizing Amazon Home Services much as Kia has already done. With just a few clicks, you can get a quote and book a contractor, and in no time your E-Tron will be as juiced up as a Russian power lifter.
Outside of the home, Audi is staking its faith on a spate of new 150-kW fast(ish) chargers that Electrify America will have placed in 950 locations (300 highway and 650 metro-urban) by the end of this year. We had a chance to try out one of these newly installed stations, part of the VW Group's mandated penance for their Dieselgate dirty tricks, in the far corner of a suburban strip mall outside of Sacramento. It was simple to use. You just download the app, link it to your credit card, scan in the charger you want to use, and jack it in. And then start waiting.

Like every other automaker, Audi is quick to promote the myth that improbable amounts of range can be pumped into its battery pack in comparably improbable amounts of time. Audi's claims are 163 miles in 30 minutes, or 54 miles in 10. It has designed its battery to charge at a higher, faster rate for a longer duration than any of the competition (apart from certain Teslas at a small but growing number of V3 Superchargers), peaking at 150 kW and remaining there until the battery is nearly three-quarters full. However, in 25 minutes and starting with the battery about half full, we got only 60 miles of juice.

If this had been an actual real-life situation, our Audi E-Tron app and in-dash MMI would have helped figure out where, when, and for how long to stop and charge in order to reach our programmed destination most efficiently, similar to what Tesla does with its Trip Planner. 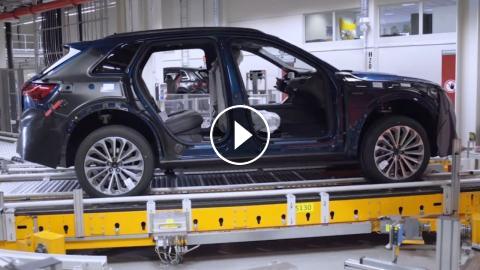