The 2020 Audi e-tron Will Be the First Electric SUV You’ll Actually Want to Buy
The irony of ripping through the oil-rich desert in the United Arab Emirates in Audi’s new 2019 e-tron, an all-electric SUV, is enough to draw a chuckle. Perching Audi’s vision for the future of mobility atop a windswept dune somewhere in between Al Ain and Abu Dhabi, and the metaphorical game of king of the (fuel) hill becomes literal. Electrification is here and it wants to zap fossil fuels into yesteryear.

Audi’s selection of the Middle East as the perfect backdrop to launch its first foray into fully electric vehicles wasn’t accidental. Tester e-trons were allocated in Masdar City, an urban residential and commercial oasis nestled on the outskirts of Abu Dhabi, purposefully built to be zero-carbon emissions. Heavily funded by the UAE government, Masdar’s promise of a fossil fuel-less future is still underway, with construction slated to complete a decade from now, and while it’s currently more a ghost town than a booming example of renewable energy, it represents the start of the tides turning.

And that’s something Audi’s parent company, Volkswagen Group, can strongly relate to. Despite producing more than 10 million vehicles with combustion engines in 2017, Volkswagen Group is planning to launch 27 electric vehicles by 2022, at a cost of $50 billion dollars. The e-tron represents a solid start to that push, a luxury battery electric vehicle that adheres closely to Audi’s brand DNA.

An Electric Design
That means there’s a lot to love about the e-tron. Audi didn’t set out to reinvent the electric utility vehicle—a market segment already containing Tesla’s Model X and Jaguar’s I-Pace, and soon, Mercedes-Benz’s EQC and Rivian’s R1S. Instead of radical swooping lines that designers tend to impart on electric vehicles, the e-tron looks like every other Audi rolling off the assembly line: modern, clean, sporty and a bit aggressive. It’s even more handsome in person, especially when dipped in Antigua Blue metallic paint. 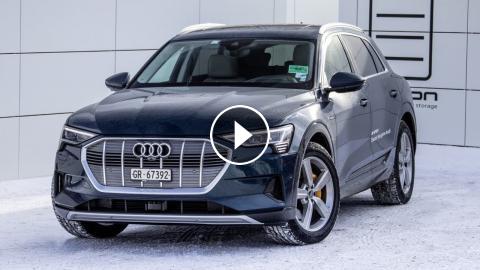