The third-generation Flying Spur rides on a new platform and has a lot more tech.

The Bentley Flying Spur has received its first from-the-ground-up redesign since 2005.
The new generation rides on the same MSB platform as the Continental GT and the Porsche Panamera, and it has a 5.1-inch-longer wheelbase than before.
It's packed with all kinds of new tech like rear-wheel steering and new luxury details like 3D leather quilting.

While most of the auto industry regards a model reaching its seventh anniversary as being ancient, the lifecycles of luxury sedans are on more leisurely timescales. The Bentley Flying Spur was launched in 2005, predating the iPhone and even most social media platforms. There was a heavy facelift in 2013 that overhauled the bodywork and the interior, but the Spur's core structure remained unchanged, as did much of its electrical architecture. By our reckoning, that meant it made it to an impressive 98 in dog years. So it seems highly likely that this all-new version, which we're seeing here for the first time, will still be with us in the 2030s.

As with the original car, the Flying Spur is effectively a sedan sister to the Continental GT coupe and convertible, sharing core mechanicals and sitting on the same Volkswagen Group–developed MSB platform. Exterior dimensions are barely changed: At 212.8 inches long it is 0.2-inch longer than the previous car, the 58.6-inch height is identical, and the 77.3-inch overall width has actually lessened by half an inch. The most important difference is with the wheelbase. At 125.8 inches, it's 5.1 inches longer than the outgoing Spur, and Bentley says the room is being put to better use in the cabin.

It certainly has a Bentley-appropriate level of visual presence, with a vertically barred chrome radiator grille that must challenge the enormous schnozz of the BMW 7-series for surface area—we're told that the vanes are playing a respectful homage to the 1957 S1 Continental Flying Spur. The lower grilles can be finished in either black or bright chrome. Another traditional touch is the available "Flying B" mascot on the hood, which is now illuminated at night, electrically deployable, and capable of meeting pedestrian impact requirements. LED matrix headlights similar in style to those of the Continental are standard, while the LED taillights incorporate a B motif.

Bodywork is made from super-formed aluminum with Bentley claiming best-in-class torsional rigidity. The new Spur's side profile gets far more muscular at the back with what is practically an old-fashioned, crisp fender line from the rear doors to the back of the tailgate, echoing the line above the front fenders. The rear end is very squared-off with a prominent trunklid that no longer incorporates the license plate. 21-inch wheels will be standard while 22-inchers are optional, and 17 standard colors will be offered.

It's no surprise to find that the cabin is big on both tradition and technology. Bentley has been doing wood and leather for longer than anyone, and we would have been shocked not to find both materials featuring heavily in the cockpit. Much of the core architecture is obviously shared with the Continental, but the design of the center console is new and incorporates horizontal air vents. Available is the Continental's rotating central dashboard panel that rotates between a wooden panel, the 12.3-inch touchscreen, or a trio of analogue dials. There's real bronze details on the clock and some of the switches, and more components now have a diamond-knurled finish. Trim options include double-veneer two-tone wood and quilted leather seats with 3D-effect quilted door cards as seen in these official shots.
Read More https://www.caranddriver.com/news/a27887457/2020-bentley-flying-spur-photos-info/ 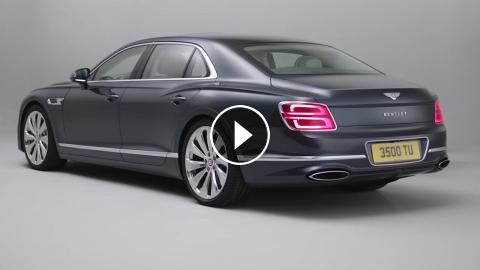 The 2020 Bentley Flying Spur Is New from the Ground Up and Way More LuxuriousThe third-generation Flying Spur rides on a new platform and has a lot mo...