Luxury automakers, however, are still holding strong. Be it a BMW 7 Series or a Mercedes-Benz S-Class, if you have a fair bit of cash to spend, there are still a number of great sedans to choose from. And at the tippy-top of the premium space, there are cars like the Bentley Flying Spur, which has been completely redesigned for 2020. With this new model, Bentley wants you to remember not just that sedans still have their place in the modern automotive market, but that they can also represent the best of all worlds.
Previous Flying Spurs suffered slightly from lifting too many design touches from the two-door Continental, making it look like a stretched version of that coupe. (It didn't help that, for a while, the car was known as the Continental Flying Spur.) Its uninspiring looks -- not to mention the knowledge that it was based on the Volkswagen Phaeton -- did little to raise the pulse.

The new Flying Spur, however, not only makes better use of Bentley's new design language, first launched on the Continental GT, but takes the liberty of really applying the company's latest signatures to a shape more recognizable as sedan, and a handsome one at that. The power lines down the side draw your eye to muscular haunches at the rear, finishing off an unapologetically robust silhouette. Spec the optional 22-inch wheels and the car has an imposing presence, whether curbside or creeping up in your rearview mirror.

The Flying Spur keeps its external badging subtle, with a neatly hidden W12 emblem along the side, and the company's logo accompanied by elegantly lettered "Bentley" in script on the rear. Up front there's a restyled Flying B hood ornament that now, for the first time, can retract into the hood the same way the Spirit of Ecstasy can retreat into a Rolls-Royce. Although far from a sleeper car, the styling is subtle enough to pass under the radar of the casual observer.
Another familiar bit is the engine. The 6.0-liter, twin-turbocharged W12 delivers 626 horsepower and 664 pound-feet of torque, which is certainly necessary considering the Flying Spur's not-insignificant 5,373 pounds of mass. From a standing start the Flying Spur can accelerate to 60 mph in 3.7 seconds, and it will keep on going all the way up to 207 mph.

Power is delivered to all four wheels through a ZF-sourced, eight-speed, dual-clutch automatic transmission -- one that's also used in the Continental GT, and the same as the PDK gearbox you get in the Porsche Panamera. That's not the only similarity to its Stuttgart sibling, mind you. The Panamera, Continental GT and Flying Spur all share the same chassis.

The Flying Spur gets the 48-volt active anti-roll tech first seen on the Bentayga SUV and later the Continental GT, as well as a new, three-chamber air suspension. On the whole, then, the Flying Spur looks to have very little hardware developed just for itself, and rather has taken all of the best bits of its stablemates in order to reinvent this four-door package. In the Continental GT, these improvements have made a positive improvement to the driving experience, and I'm glad to report the same goes for the larger Flying Spur.

My drive started in Casino Square in the heart of Monte Carlo. Possibly the most fitting place to drive a $200,000-plus luxury sedan. The Flying Spur seamlessly fits in amongst the incredible wealth on display. The deep burble of the W12 engine announces your presence without shouting about it too much, and the incredible sound insulation keeps the chatter of the tourists out of the cabin. 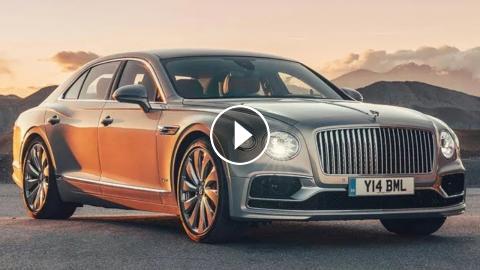