2023 Mercedes-Benz EQE – E-Class Luxury with Electric Power
Its exterior dimensions are slightly larger than those of the E-Class, but it’s much larger inside, as is common with electric vehicles (EVs). Mercedes designers have given it almost a consistent arch from grille to trunk lid, stretching the greenhouse further forward and back than on its gas-powered sibling. It dispenses with a traditional grille, substituting a simple black panel between two sharply angled headlights to clearly distinguish it as an electric-drive sedan.
At launch, the EQE will come in two versions. Mercedes has given details on just one. The EQE 350 will offer 288 horsepower, with a single motor mounted to the rear axle. Its 90.6-kilowatt-hour battery is relatively large. Mercedes expects it to be certified for a 410-mile range in European testing. The American EPA’s test results traditionally result in a shorter certified range.
The interior is overflowing with high-tech features. The EQE displayed in Munich features a dashboard made of a single, door-to-door expanse of glass capable of functioning as three separate display screens. The so-called Hyperscreen is an added-cost option on the more exclusive EQS, so it almost certainly won’t be standard equipment on the EQE. A head-up display can project turn-by-turn directions, speed, and other info directly in the driver’s view of the road.

Options will include several digital soundscapes to fill the place of the absent engine noise. As on the EQS, these carry ethereal titles like Silver Waves, Vivid Flux, and Roaring Pulse and change in response to acceleration and braking. 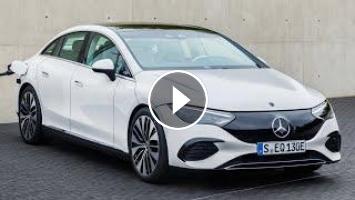