A Love Story: Pluto And Charon...

Hello, everyone. Welcome to our channel. In today’s video Smart is the New Sexy will tell you about the cutest romantic journey in the solar system - a dwarf planet binary system. We’re talking about Pluto and its moon Charon. Do you want to know what’s so special about these two? Please, keep watching.

Pluto was discovered in 1930 by Clyde W. Tombaugh at the Lowell Observatory in Flagstaff Arizona. Back then scientists believed that there should be more than 8 planets in the Solar System. After a year of observations, scientists finally discovered Planet X, that later was named Pluto after the Roman god of the underworld.

Until the discovery of Charon in 1978, scientists weren’t sure about the Pluto’s real size and mass. Today the most accurate measurement by the New Horizons spacecraft gives the size of Pluto at 1,500 miles across. Pluto is actually a really small piece of rock. With the development of advanced space technologies, scientists found out that there are at least 70,000 icy objects, with the same composition as Pluto, that measures 100 km across or more in the Kuiper Belt. That’s why, according to the new rules, Pluto isn’t a planet anymore. Pluto is sad. We’re sad.

Even if Pluto isn’t a planet anymore, it still keeps the title of Kuiper Object Heavyweight Champion with its 5 moons. One of them is Charon. They’re a wonderful pair: 2 cold icy worlds, spinning around their common center of gravity like a pair of figure skaters clasping hands. Isn’t it romantic?

A Love Story: Pluto And Charon... 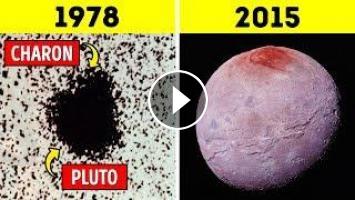 Subscribe! Because SMART IS THE NEW SEXY: https://goo.gl/JTfP6L Hello, everyone. Welcome to our channel. In today’s video Smart is the New Sexy will t...