ava
Everyone in the world of Cyberpunk 2077 knows the name Johnny Silverhand. He's a veteran, a rockerboy and, above all, a revolutionary. In an inspired stroke of casting, he's also being portrayed by Keanu Reeves in CD Projekt Red's upcoming first person RPG. In preparation for its November release, we're going to look back at the origins and history of this key character so you'll fully understand his role when you begin your adventure in Night City.

So what even is a rockerboy? In this video, Jake explains the class, which is unique to Cyberpunk's fiction, and how Johnny embodies this role through his music and anti-corporate ideologies. These ideologies came straight from his experiences as an American soldier during the underhanded Central American Conflict. This also happens to be where he lost his arm. With a prosthetic replacement, Silverhand changed his name and started the band Samurai, which was his conduit for speaking out against the status quo.

We also get the skinny on Johnny's tragic lost love, and a hatred for the mega corp Arasaka that now drives him in a post-Samurai world. We don't know much about the role Reeves's electronic ghost will be playing in V's story, other than that it will likely be significant. We'll have to wait for the game's release for more specifics and to see how Reeves's voice acting and motion capture for the character turned out. "Wake the f*ck up, Samurai, we have a city to burn." 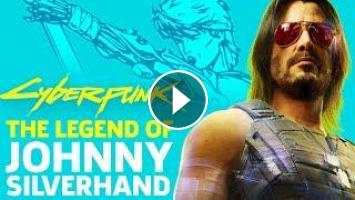 Everyone in the world of Cyberpunk 2077 knows the name Johnny Silverhand. He's a veteran, a rockerboy and, above all, a revolutionary. In an inspired ...