Ed Winters: Can This One Simple Change Save the Planet? | Talks at Google

Added 1 month ago by Arnia
29 Views
Ed Winters, also known as Earthling Ed, is a vegan educator, filmmaker, public speaker and entrepreneur based in London, England. His speech "You Will Never Look at Your Life in the Same Way Again", has been viewed over 33 million times across YouTube and Facebook. Winters is the co-founder and co-director of Surge, an animal rights organisation, which in 2016 founded The Official Animal Rights March, which has grown from 2,500 participants in London in 2016 to 41,000 participants across the globe in 2019. In 2017, Winters produced the documentary Land of Hope and Glory, and in 2018 he opened Unity Diner, a non-profit vegan diner in London where all of the profits go to Surge as well as the development of a new sanctuary for farm animals outside of London. Winters has spoken at multiple companies, schools and universities in Europe and in North America, including 1/3 of UK universities and at 6 Ivy league colleges, where he was also invited to be a guest lecturer at Harvard University in April 2019. He has also given two TEDxTalks, one at Lund University and one at Bath University. Recently, Winters launched his own podcast called The Disclosure Podcast.

To keep up with the demand of animal products without compromising the environment, we need drastic changes in our food systems. Winters will tackle the complexities of this topic and challenge the view that we are solely consumers. Instead, the argument will be made that we have to become food citizens, aware of the origin of our foods and the damage caused by our everyday choices. Drawing on the latest science and most up-to-date research, this talk will analyse the impact our food choices have and ask the question, what will the future of food look like.

Ed Winters: Can This One Simple Change Save the Planet? | Talks at Google 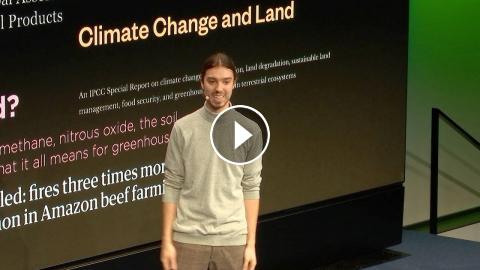 Ed Winters, also known as Earthling Ed, is a vegan educator, filmmaker, public speaker and entrepreneur based in London, England. His speech "You...