admin
Stories:
- Huawei Mate 9 and Mate 9 Porsche Design make their joint official debut
- Midnight Nextbit Robin on Amazon just $170
- AT&T Gear S3 frontier pre-orders start November 4
- Google Daydream View hitting retail worldwide on November 10
- Google Pixel adoption rates outpacing Nexus 6P
Watch today's Pocketnow Daily as we talk about the recent announcement of the Huawei Mate 9 and Mate 9 Porsche Design. Then we discuss the Nextbit Robin and its deals on Amazon. AT&T follows with its pre-orders announced for the Gear S3. Then we talk about Google Daydream VR, and when you can get the Daydream View. We end today's show talking about the Google Pixel, and how it has surpassed sales expectations.
All this and more after the break.
Subscribe:
About us:
Pocketnow has been a key source of mobile technology news and reviews since its establishment in 2000. With offices on three continents, Pocketnow offers round-the-clock coverage of the mobile technology landscape, from smartphones to tablets to wearables. We aim to be your number-one source for mobile tech news, reviews, comparisons, and commentary. If you love mobile as much as we do, be sure to subscribe!
Follow us: 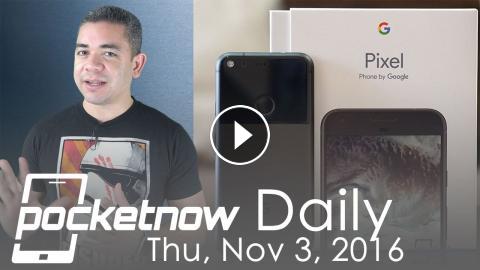