admin
Watch today's Pocketnow Daily as we talk about the Google Pixel 3's leaks that were real after all as some images of Pixel 2 prototypes were found on Google blogs that had the same logo that seemed fake. Then we talk about the fact that the Apple Watch is ditching physical buttons for capacitive keys this year as the iPhone 7 did. The OnePlus 6 just received a software update with a lot of new features including the Selfie Portrait Mode we've all been waiting for. Then we talk about Huawei as the company ordered a significant amount of 6.9 in displays to Samsung, probably for their upcoming Mate 20 or 20 Pro. We end today's show talking about deals for the Huawei Mate 10 Pro.
All this and more after the break.
Stories:
- Leaked Pixel 3 XL had a legitimate Google logo on it
- Apple Watch getting Taptic-enabled buttons
- OnePlus 6 gets OxygenOS 5.1.6 OTA update with front camera Portrait Mode
- Huawei Mate 20 could get a 7-inch OLED display from Samsung
- Huawei Mate 10 Pro price goes down to $550 across authorized US retailers
Subscribe:
Graphics provided by: Motionvfx.com
About us:
Pocketnow has been a key source of mobile technology news and reviews since its establishment in 2000. With offices on three continents, Pocketnow offers round-the-clock coverage of the mobile technology landscape, from smartphones to tablets to wearables. We aim to be your number-one source for mobile tech news, reviews, comparisons, and commentary. If you love mobile as much as we do, be sure to subscribe!
Follow us: 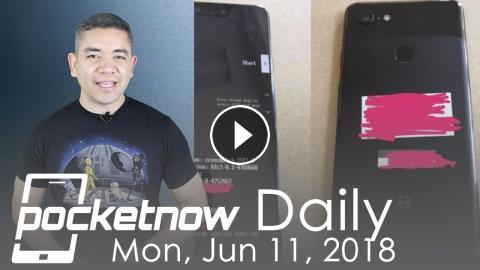 Watch today's Pocketnow Daily as we talk about the Google Pixel 3's leaks that were real after all as some images of Pixel 2 prototypes were found on ...