admin
Watch today's Pocketnow Daily as we talk about the rumors of a possible Google Ultra Pixel in the works, instead of the Google Pixel 2 and Google Pixel 2 XL. Then we focus on the iPhone 8, a possible case of device separation out of the blue, which we're dubbing "Separation-gate." Other rumors have a new Google Home Max to possibly also launch along with the next batch of devices Made By Google. We also talk about the Samsung Galaxy X as we hear that the project of making a foldable smartphone has been a work in progress for years from none-other than the company's lead in mobile. We end today's show talking about the Samsung Gear IconX and the deals you can currently find in stores.
All this and more after the break.
Stories:
- Sale leaves original Samsung Gear IconX wireless buds at 75 percent off
- Back to square one: Samsung is again considering a fold-in smartphone design
- Apple investigating iPhone 8 Plus units coming apart
- It’s a bit of a stretch, but a ‘high-quality’ Google Home Max could also debut on October 4
- Real or not, Google Ultra Pixel is the best sort of pun
Read more:
Lee más en Español:
Subscribe:
About us:
Pocketnow has been a key source of mobile technology news and reviews since its establishment in 2000. With offices on three continents, Pocketnow offers round-the-clock coverage of the mobile technology landscape, from smartphones to tablets to wearables. We aim to be your number-one source for mobile tech news, reviews, comparisons, and commentary. If you love mobile as much as we do, be sure to subscribe!
Follow us: 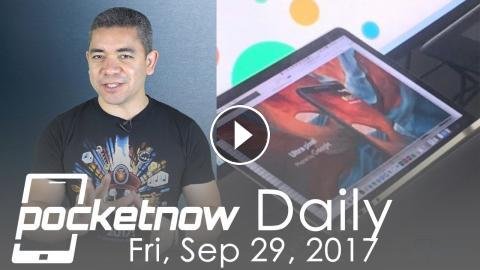 Watch today's Pocketnow Daily as we talk about the rumors of a possible Google Ultra Pixel in the works, instead of the Google Pixel 2 and Google Pixe...