admin
T-shirts provided by RIPT. Learn more about it here:
Stories:
- Stylish Michael Kors smartwatches now available for $350 and up, $95 activity trackers too
- Don’t lose hope for modular LG G6, company spokesman says
- It seems that HTC Nexus pricing will take a hike
- Google Pixel and Pixel XL phones could kick off pre-orders on October 4, sales on October 20
- Huawei 7P specs on the table from China
- iPhone 7 vs iPhone 7 Plus spec comparison
Watch today's Pocketnow Daily as we talk about the recent styles you can find for Andorid Wear through Michael Kors. Then we talk about the LG G6 and how it might still retail modularity. The HTC Nexus follows as we hear about pricing and possible dates. Then we talk about the Huawei 7P, which could point to being the Google Nexus 7. We end today's show talking about the iPhone 7 event.
All this and more after the break.
Subscribe:
About us:
Pocketnow has been a key source of mobile technology news and reviews since its establishment in 2000. With offices on three continents, Pocketnow offers round-the-clock coverage of the mobile technology landscape, from smartphones to tablets to wearables. We aim to be your number-one source for mobile tech news, reviews, comparisons, and commentary. If you love mobile as much as we do, be sure to subscribe!
Follow us: 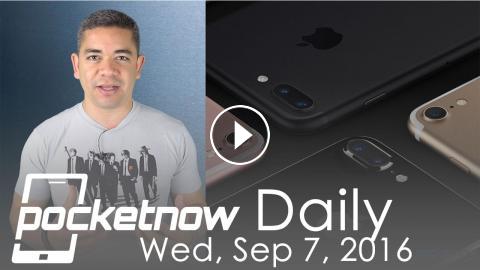