admin
- iPhones For Sale
On Pocketnow Daily, Samsung is betting big on the Galaxy S10 and the Galaxy F to pick up its sales. Apple just cut down production numbers for its new iPhones as demand is lower than expected. We may be seeing a Google Pixel 3 Lite soon according to some new leaks. A white variant of the Galaxy Note 9 will reportedly be released on November 23, according to trusted sources. We end today's show with LG announcing their XBOOM AI ThinQ WK9 smart display with 20W stereo speakers.
All this and more after the break.
Stories:
- Galaxy S10 and Galaxy F reportedly coming in February, as Samsung CEO is betting big on them
- Apple cuts production orders for all new iPhones
- A Pixel 3 Lite might join the Google Pixel line-up, leak suggests
- White Galaxy Note9 to become official this week
- The LG XBOOM AI ThinQ WK9 is a smart display with Google Assistant
#PocketnowDaily #GalaxyF #iPhoneXs
Subscribe:
Follow us:
Graphics provided by: Motionvfx.com
About us:
Pocketnow has been a key source of mobile technology news and reviews since its establishment in 2000. With offices on three continents, Pocketnow offers round-the-clock coverage of the mobile technology landscape, from smartphones to tablets to wearables. We aim to be your number-one source for mobile tech news, reviews, comparisons, and commentary. If you love mobile as much as we do, be sure to subscribe!
[Video Title]
[Video URL]
Pocketnow 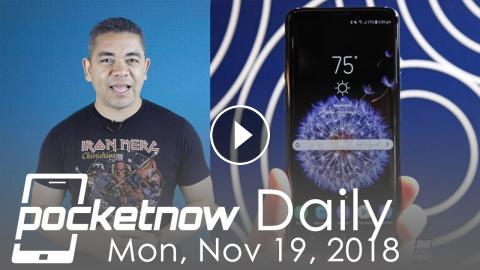 - iPhones For SaleOn Pocketnow Daily, Samsung is betting big on the Galaxy S10 and the Galaxy F to pick up its sales. Apple just cut down production n...