admin
Watch today's Pocketnow Daily as we talk about Apple's official confirmation of the iPhone 8 event. Then we talk about the Samsung Galaxy S9 and how early we can expect to get it according to rumors. The Lenovo Mirage follows as we talk about the experience we had using it at IFA 2017. Then we also focus on the Moto X4 and our initial impressions of what we saw at the event. We also discuss T-Mobile's teaser of a new Un-carrier event to happen on September 6th.
All this and more after the break.
Stories:
- T-Mobile’s John Legere helming Un-carrier Next on September 6
- Moto X4 hands-on: return of an Android favorite (Video)
- Lenovo Mirage is the AR headset that’s part of Star Wars: Jedi Challenges
- Same old story? Samsung Galaxy S9 could debut in January, launch globally in February
- Apple event now set for September 12 at Steve Jobs Theater
Read more:
Lee más en Español:
Subscribe:
About us:
Pocketnow has been a key source of mobile technology news and reviews since its establishment in 2000. With offices on three continents, Pocketnow offers round-the-clock coverage of the mobile technology landscape, from smartphones to tablets to wearables. We aim to be your number-one source for mobile tech news, reviews, comparisons, and commentary. If you love mobile as much as we do, be sure to subscribe!
Follow us: 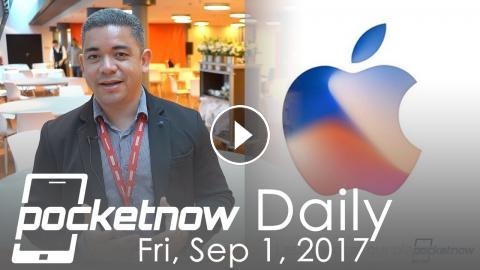 Watch today's Pocketnow Daily as we talk about Apple's official confirmation of the iPhone 8 event. Then we talk about the Samsung Galaxy S9 and how e...