admin
Stories:
- Apple A9 CPU inside iPhone 6s listed at 1.8GHz clock speeds in China
- iPad Mini 4 teardown: much like the Air 2, just as hard to fix
- New Google Chromecast rumored for September 29 intro with both external and internal changes
- Samsung Pay may go to budget phones, too
- Samsung Gear S2 expected 10/2, 3G starting 11/6
Watch today's Pocketnow Daily as we talk about some of the recent benchmarks that claim that the iPhone 6s is a very powerful device. Then we talk about the iPad mini 4, and how reparable it isn't. Then we talk about Google's probable refresh for the Chromecast, and what we should expect. We then talk about Samsung Pay, and how it might reach more affordable devices. We end today's show talking about the Samsung Gear S2, and when we might expect it to launch.
All this and more after the break.
Subscribe:
About us:
Pocketnow has been a key source of mobile technology news and reviews since its establishment in 2000. With offices on three continents, Pocketnow offers round-the-clock coverage of the mobile technology landscape, from smartphones to tablets to wearables. We aim to be your number-one source for mobile tech news, reviews, comparisons, and commentary. If you love mobile as much as we do, be sure to subscribe!
Follow us: 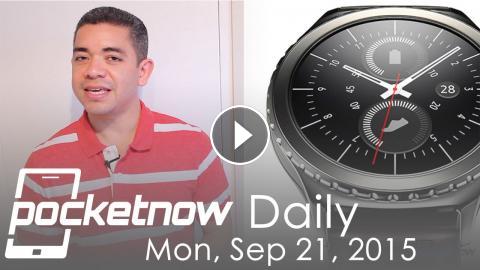