admin
Stories:
- Samsung admits 128GB Galaxy Note 5 listings were in error
- Hands-on LG Nexus phone leak is a dead ringer for recent renders
- New Huawei Nexus unofficial render offers close-up look at hardware design
- Leaked iPhone 6s benchmarks defeat the Galaxy S6, sort of
- Android M is Marshmallow: Google statue confirms it (Android 6.0, too)
Watch today's Pocketnow Daily as we talk about Samsung's confirmation that the 128GB Galaxy Note 5 isn't going to happen. Then we talk about the LG Nexus leaks, as we now see it in photos. Then we focus on the Huawei Nexus, and some of the new renders that have just emerged. Then it's all about the iPhone 6s, and some benchmarks that even blow the Galaxy S6 out of the water in certain areas, not all. We end today's show talking about Android 6.0 Marshmallow.
All this and more after the break.
Subscribe:
About us:
Pocketnow has been a key source of mobile technology news and reviews since its establishment in 2000. With offices on three continents, Pocketnow offers round-the-clock coverage of the mobile technology landscape, from smartphones to tablets to wearables. We aim to be your number-one source for mobile tech news, reviews, comparisons, and commentary. If you love mobile as much as we do, be sure to subscribe!
Follow us: 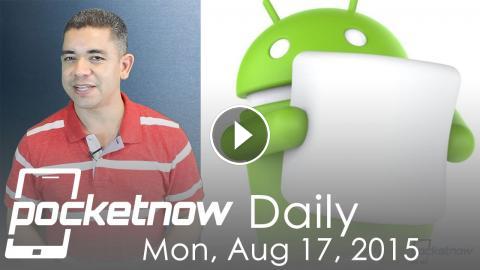