admin
Stories:
- Nextbit Robin priced down to $145 on Amazon
- Several refurbished Apple Watch Series 1 and Series 2 models are here to save you a few bucks
- Google Pixel speakers staticky and peaking, needs a ROM to fix
- Android N for Galaxy S7 on Vodafone Australia is version 7.0
- iPhone 8 purportedly codenamed Ferrari, iPhone 7s and 7s Plus looking more and more likely too
Watch today's Pocketnow Daily as we talk about some of the crazy deals available for the Nextbit Robin. Then we discuss the deals you can find for the Apple Watch Series 1 and 2, if you could call them deals. The Google Pixel follows as we learn that the audio clacking is a common thing. Then it's all about the Samsung Galaxy S7 and its Android N update. We end today's show learning about the iPhone 8 codename Ferrari, and the fact that the iPhone 7s might also be in the pipeline.
All this and more after the break.
Subscribe:
About us:
Pocketnow has been a key source of mobile technology news and reviews since its establishment in 2000. With offices on three continents, Pocketnow offers round-the-clock coverage of the mobile technology landscape, from smartphones to tablets to wearables. We aim to be your number-one source for mobile tech news, reviews, comparisons, and commentary. If you love mobile as much as we do, be sure to subscribe!
Follow us: 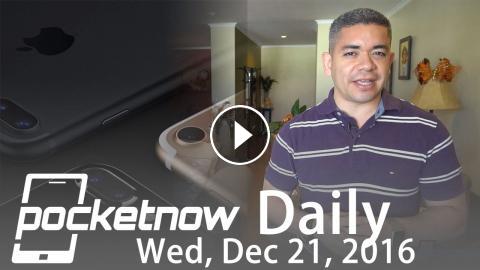 Stories:- Nextbit Robin priced down to $145 on Amazon - Several refurbished Apple Watch Series 1 and Series 2 models are here to save you a few bucks ...