admin
Watch today's Pocketnow Daily as we talk about how the iPhone 8 defeated the iPhone X in sales during the end of 2017. Then we talk about Samsung and how its Galaxy S7 Edge is considered the phone that was most copied in 2017. ISOCELL sensors from Samsung is next as we learn about all the benefits of the recent upgrade. Then we focus on the iPhone 6 Plus as Apple is running out of stock for battery replacements, and that might land you a brand new iPhone 6S Plus. We end today's show talking about the LG G6+ that's currently on sale at B&H.
All this and more after the break.
Stories:
- B&H has LG G6+ for 25 percent off at $599.99
- Lacking iPhone 6 Plus repair stock, iPhone 6s Plus units may be given out
- New, improved ISOCELL cameras to be ready for Galaxy S9?
- Samsung was 2017’s most copied smartphone brand, Galaxy S7 Edge ruled clones chart
- Survey says iPhone X was less popular than small iPhone 8 in the US during Q4
Read more:
Lee más en Español:
Subscribe:
About us:
Pocketnow has been a key source of mobile technology news and reviews since its establishment in 2000. With offices on three continents, Pocketnow offers round-the-clock coverage of the mobile technology landscape, from smartphones to tablets to wearables. We aim to be your number-one source for mobile tech news, reviews, comparisons, and commentary. If you love mobile as much as we do, be sure to subscribe!
Follow us: 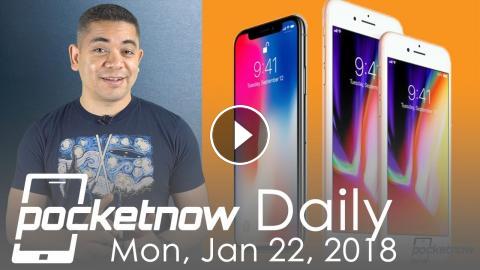