admin
Watch today's Pocketnow Daily as we talk about the iPhone 7s and iPhone 7s Plus design changes. We also cover Samsung's event at IFA and what we do expect. Sonos follows as we hear that the company is hard at work to compete against Apple's HomePod. We also cover the news of more color options for the Samsung Galaxy S8. We also focus on deals, this time for those interested in a Google Chromecast Ultra.
All this and more after the break.
Stories:
- Google Chromecast Ultra is $10 off wherever available
- Pink Galaxy Note 8 outed in Taiwan prior to September 1 pre-orders
- Samsung makes August 30 IFA event officially official, will show ‘what’s new in wearables’
- Voice-controlled Sonos smart speaker confirmed at FCC, likely breaking cover in early October
Read more:
Lee más en Español:
Subscribe:
About us:
Pocketnow has been a key source of mobile technology news and reviews since its establishment in 2000. With offices on three continents, Pocketnow offers round-the-clock coverage of the mobile technology landscape, from smartphones to tablets to wearables. We aim to be your number-one source for mobile tech news, reviews, comparisons, and commentary. If you love mobile as much as we do, be sure to subscribe!
Follow us: 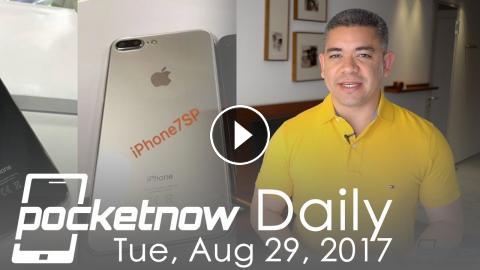 Watch today's Pocketnow Daily as we talk about the iPhone 7s and iPhone 7s Plus design changes. We also cover Samsung's event at IFA and what we do ex...