admin
Stories:
- Year-end LG V20 deals galore: 50 percent off Sprint version, free microSD card with unlocked model
- Microsoft Surface Pro 5 set for Q1 2017 launch with UHD screen, rumor has it
- Leaked CAD-based Moto X (2017) renders and video reveal a poor man’s Moto Z
- Samsung Galaxy S7 Nougat beta program is finally ending today, official update coming in January
Watch today's Pocketnow Daily as we talk about some of the recent deals you can find for the LG V20 on Sprint. Then we talk about the Microsoft Surface Pro 5 and when we chould expect it. The Moto X 2017 follows as leaked renders and images emerge. Then we discuss the Samsung Galaxy S7 Nougat update, and why we've wated so long. We end today's show talking about how the iPhone 7 wasn't enough for switchers from the Galaxy Note 7 to even care.
All this and more after the break.
Subscribe:
About us:
Pocketnow has been a key source of mobile technology news and reviews since its establishment in 2000. With offices on three continents, Pocketnow offers round-the-clock coverage of the mobile technology landscape, from smartphones to tablets to wearables. We aim to be your number-one source for mobile tech news, reviews, comparisons, and commentary. If you love mobile as much as we do, be sure to subscribe!
Follow us: 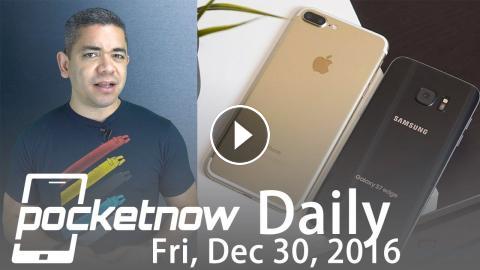