admin
T-shirts provided by RIPT. Learn more about it here:
Stories:
- B&H has 64 and 128GB Nexus 6P variants at $100 off, free Garmin Vivofit 3 included
- Two very attractive Moto 360 (2nd gen) models are deeply discounted in refurb condition
- Microsoft staff cuts grow to 4,700 for the next year
- iPhone 7 Lightning adapter for headphones seemingly found in Vietnam
- New rumors and leaks: Galaxy Note 7 pricing and ETA, Gear VR 2 render and dimensions
Watch today's Pocketnow Daily as we talk about the recent deals that you can find for the Google Nexus 6P. Then we talk about some other the Moto 360 2nd generation in some new deals that make it irresistible. Microsoft follows as the company has just announced more job cuts for 2017. Then we discuss the iPhone 7 as we found some leaked images of the lightning adapter for a 3.5mm headphone jack. We end today's show talking about the recent leaks of the Samsung Galaxy Note 7 with regards to ETA, Price and even the Gear VR 2.
All this and more after the break.
Subscribe:
About us:
Pocketnow has been a key source of mobile technology news and reviews since its establishment in 2000. With offices on three continents, Pocketnow offers round-the-clock coverage of the mobile technology landscape, from smartphones to tablets to wearables. We aim to be your number-one source for mobile tech news, reviews, comparisons, and commentary. If you love mobile as much as we do, be sure to subscribe!
Follow us: 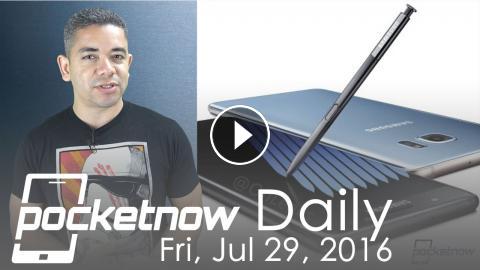