admin
T-shirts provided by RIPT. Learn more about it here:
Stories:
This weekend only, Verizon shaves up to $300 off full iPhone 6 Plus retail prices
- HTC 10 sold at $100 discount through August 31 in four colors, including red and gold
- It’s Galaxy Note 7 launch day, here are a bunch of accessories also on sale
- Sony’s IFA 2016 invitation is cryptic, weird and eclectic, previewing lots of new gadgets
- Non-Plus iPhone 7 isn’t getting a dual rear camera, but OIS might at least be in store
Watch today's Pocketnow Daily as we talk about the recent deals that you can find for the iPhone 6 Plus on Verizon, and notice there is no S on that name. Then we talk about the HTC 10 and some recent deals that you can take advantage of until August 31. The Samsung Galaxy Note 7 is next as we see all the deals available with the launch of the new phablet. Sony follows as the company has just teased what to expect for IFA 2016. We end today's show talking about the regular iPhone 7, and what will differentiate it from the Plus variant.
All this and more after the break.
Subscribe:
About us:
Pocketnow has been a key source of mobile technology news and reviews since its establishment in 2000. With offices on three continents, Pocketnow offers round-the-clock coverage of the mobile technology landscape, from smartphones to tablets to wearables. We aim to be your number-one source for mobile tech news, reviews, comparisons, and commentary. If you love mobile as much as we do, be sure to subscribe!
Follow us: 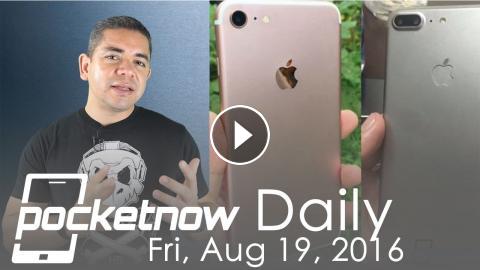 T-shirts provided by RIPT. Learn more about it here: Stories:This weekend only, Verizon shaves up to $300 off full iPhone 6 Plus retail prices - HTC 1...