admin
T-shirts provided by RIPT. Learn more about it here:
Stories:
- Motorola now also gives away select Moto Mods with Moto Z and Z Force Droid
- First-gen Apple Watch Sport available at all-time low price of $190 from Best Buy
- Jet Black iPhone 7 sells out in minutes, shipping waits lasting until November
- Source: Microsoft Lumia line to end in December
- Samsung expediting new Note 7 shipments after FAA advisory
Watch today's Pocketnow Daily as we talk about some of the recent deals Motorola is providing for the Moto Z. Then we talk about some more deals, this time for the first-generation Apple Watch. The iPhone 7 Plus follows as we learn just how quickly it sold out. Then we discuss the future of the Microsoft Lumia line-up, which doesn't seem at all promising. We end today's show talking about the Samsung Galaxy Note 7, and how the company is now expediting US replacements after the FAA made it a topic.
All this and more after the break.
Subscribe:
About us:
Pocketnow has been a key source of mobile technology news and reviews since its establishment in 2000. With offices on three continents, Pocketnow offers round-the-clock coverage of the mobile technology landscape, from smartphones to tablets to wearables. We aim to be your number-one source for mobile tech news, reviews, comparisons, and commentary. If you love mobile as much as we do, be sure to subscribe!
Follow us: 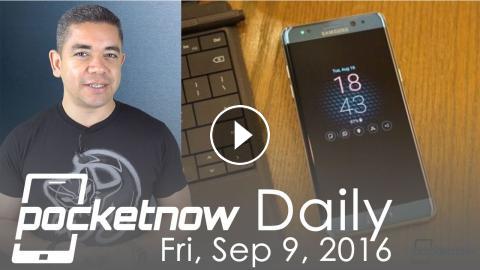