admin
Stories:
- Galaxy Note 5 S Pen stuck? Samsung says RTFM
- Verizon now welcomes activation of compatible off-network unlocked phones
- Fresh batch of rumored LG Nexus 5 (2015) specs includes Snapdragon 808, 3GB RAM
- Purported iPhone 6s components and iPhone 6 parts combine into semi-working device
- Lenovo moving its smartphone business to under Motorola’s brand
Watch today's Pocketnow Daily as we talk about Samsung's approach to the recent Galaxy Note 5 S Pen complaints. Then we talk about Verizon's new option to allow certain unlocked phones. We then focus on the LG Nexus 5 leaked specifications. Then we talk about a leaked video of a working iPhone 6s. We end today's show talking about Lenovo's decision to switch its mobile division to Motorola.
All this and more after the break.
Subscribe:
About us:
Pocketnow has been a key source of mobile technology news and reviews since its establishment in 2000. With offices on three continents, Pocketnow offers round-the-clock coverage of the mobile technology landscape, from smartphones to tablets to wearables. We aim to be your number-one source for mobile tech news, reviews, comparisons, and commentary. If you love mobile as much as we do, be sure to subscribe!
Follow us: 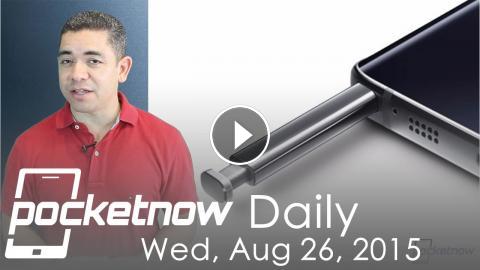