admin
Watch today's Pocketnow Daily as we talk about new CAD renders that were just released for the Galaxy Note 9 as we see some small improvements in the design. Then we talk about the fact that iPads currently have the Face ID settings with iOS 12 pointing us to new iPads coming anytime soon with the technology. Samsung is reportedly renaming their Gear VR line-up to Galaxy VR and hopefully they will revamp the hardware too. Then we move on to OnePlus as their Silk White Variant of the OnePlus 6 sold out in under 24 hours, they will restock this June 12th. We finish today's show talking about BOGO deals for the Galaxy S9.
All this and more after the break.
Stories:
-Behold the Samsung Galaxy Note 9 in all its leaked factory CAD-based glory
-Face ID settings tuned for iPad, but no hardware yet
-Samsung’s Gear VR name is reportedly dead, long live the upcoming Galaxy VR headset
-Gone in ‘less than 24 hours’, the OnePlus 6 Silk White will return on June 12
-Another day, another Galaxy S9 bundle deal from Best Buy – this time with free Gear 360
Subscribe:
Graphics provided by: Motionvfx.com
About us:
Pocketnow has been a key source of mobile technology news and reviews since its establishment in 2000. With offices on three continents, Pocketnow offers round-the-clock coverage of the mobile technology landscape, from smartphones to tablets to wearables. We aim to be your number-one source for mobile tech news, reviews, comparisons, and commentary. If you love mobile as much as we do, be sure to subscribe!
Follow us: 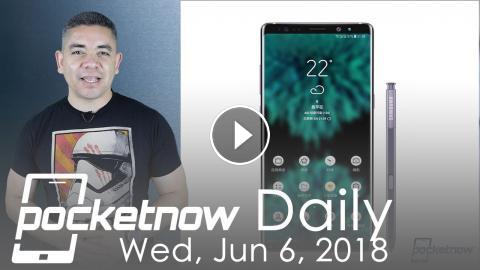 Watch today's Pocketnow Daily as we talk about new CAD renders that were just released for the Galaxy Note 9 as we see some small improvements in the ...