admin
Watch today's Pocketnow Daily as we talk about the Galaxy Note 9's pricing along with it's specs. Then we talk about Apple becoming the first company to ever reach a trillion dollars in market cap. We get a new benchmark for the Google Pixel 3 that shows us that the phone will only bring 4GB of RAM but it will have a Snapdragon 845 SoC. The Google Camera App will now be available in the Pixelbook and other Chromebooks, which means it could arrive to other devices. We end today's show with Samsung's announcement for their IFA event.
All this and more after the break.
Stories:
- Galaxy Note9 name confirmed by Samsung for its ‘most powerful phone yet’ [UPDATE: video leaked]
- Apple hits the $1 trillion mark, becomes first US company to cross it
- Pixel 3 XL Snapdragon 845 and 4GB of RAM confirmed by benchmark results
- The Pixelbook and other Chromebooks might get the Google Camera app
- Samsung IFA 2018 event confirmed, what will the Koreans bring to Berlin?
Subscribe:
Graphics provided by: Motionvfx.com
About us:
Pocketnow has been a key source of mobile technology news and reviews since its establishment in 2000. With offices on three continents, Pocketnow offers round-the-clock coverage of the mobile technology landscape, from smartphones to tablets to wearables. We aim to be your number-one source for mobile tech news, reviews, comparisons, and commentary. If you love mobile as much as we do, be sure to subscribe!
Follow us: 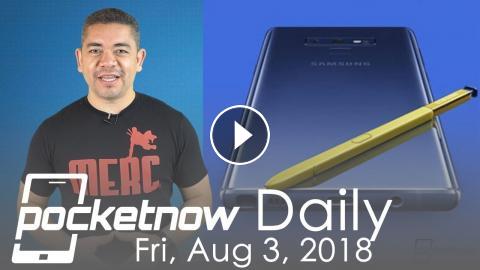 Watch today's Pocketnow Daily as we talk about the Galaxy Note 9's pricing along with it's specs. Then we talk about Apple becoming the first company ...